A Grand Day Out 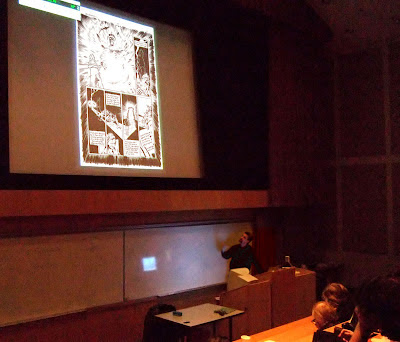 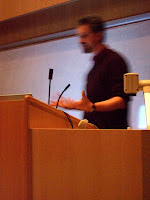 Just back from Middlesbrough, where I was guest lecturing at the University of Teesside. Doesn't that sound grand? Actually, it just means my old mate Nigel Kitching*, who's a part-time lecturer there, invited me over to drone on at his poor students for an hour or so about freelance life.

Left: Looks like I put too much sugar 0n me Puffa-Puffa Rice that morning.
Photo: Nigel Kitching.

It seemed to go down reasonably well, despite my drastically mis-timing my career retrospective (45 minutes on Some Scribbles I Did While I Was At College, 15 on Stuff You Might Actually Have Heard Of.) But, judging from the comments of people I talked to afterwards, I think I more-or-less got across what I intended, which was to give them a sense of where I'd been at their age, how I'd progressed after leaving college, and how many duffings-up I'd endured in the process.

If I do this sort of thing again, I think I'll try and pick fewer pieces to talk about at length, but maybe post a load of stuff on the web so that anyone whose interested can see the process of development in more detail. 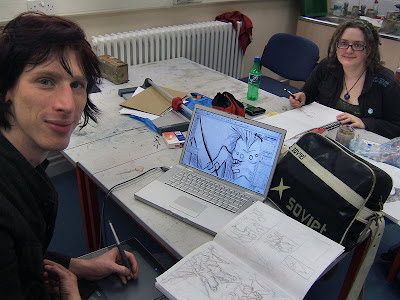 Steven Walker & Heather Sheppard, who turns out to be a distant relation of the astronaut John Glenn, which is nearly but not quite enough to make me forgive her for having a better Mac and Wacom tablet than me :-)
In the afternoon I had a chance to talk to some of the students in the studios; I was really impressed by the standard of work the students were putting out, and the dedication and work ethic of the ones I talked to. I was also rudely awakened to the fact that the techno-fear that haunts my generation is just not shared by these kids; the head-start my computer literacy has given me is going to evaporate like the morning dew in the next five years or so... but all paranoia aside, it was refreshing swapping ideas, and in particular I learned a few things myself while giving Steven (shown above) some tips on using Adobe Illustrator. 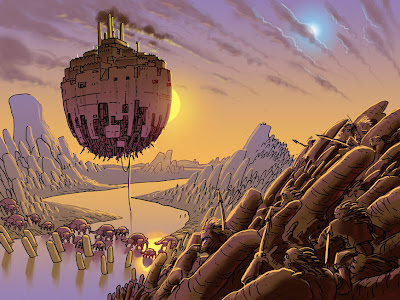 Concept drawing from Company Mann, a rejected project for 2000AD.
Copyright © 2004 Nigel Kitching and Me.
*Nigel first came to public attention writing and drawing cyber-punk series The Light Brigade for Trident Comics in the 1990's. He was the regular artist on Mark Millar's first published series, Saviour, before becoming a mainstay on Sonic the Comic for most of its nine year run. His his most recent published work in comics was AHAB (drawn by Richard Elson) for 2000AD.
We first worked together when I drew a couple of fill-in issues of The Light Brigade for him. Later, he contributed to both my series for Deadline magazine, Timulo and Fatal Charm. We've also collaborated on a couple of projects that never saw print; a humour strip called Fly in the Ointment for Deadline, and Company Mann (originally designed by Mike McMahon) for 2000AD (see above). 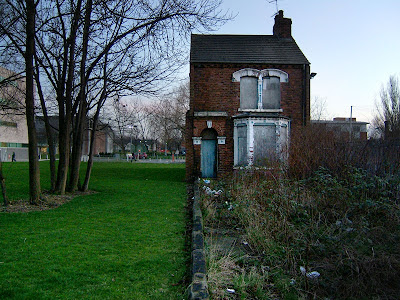 Middlesbrough is a place of contrasts; around the University of Teesside Campus,
the contrast between run-down areas and new development can be ridiculously sharp.
Posted by Unknown at 9:54 am

Wow! That image from Company Mann looks amazing. How could they have turned it down? Are those people on the right running through the back of some giant hedge hog?

They have a copy of Leviathan in the library in town (St Peter Port Guernsey). Do you get royalties if someone borrows it? No one has borrowed it yet and obviously I have it already.

Mmm... Company Mann looks interesting. Do give us a clue what it was about please.

(lovely recent blogging, by the way. So nice to find a decent essay length chunk of text rather than the quick-fire mind-blips so many othr bloggers (me included) are guilty of.)

Got to throw my love in for Company Mann too. Loved Nigel Kitching's art on Saviour and Kight Brigade.

Mikal - authors do get paid for library lending (details here). I would assume (though I have no guarantee!) that publishers may well submit a registration on their authors' behalf?

Matt - interesting to see that photo in colour and in b&w. It looks much starker and older in b&w (not surprisingly) but it works very well in colour too, which I'm not sure I would have predicted.

Oooh, have just been driven to asking a colleague (here in the wacky world of publishing) and no, authors have to register individually for the Public Lending Right. The publishers cannot do it on their behalf.

Mikal/Benjamin: re Company Mann - this was going to be a Billy Budd style tale of a new recruit to the security team of a giant factory being bullied by his horrendous staff sergeant - a guy called 'Mann,' hence the title. The factory (pictured in the image) floated across the surface of this undeveloped alien world, following herds of giant animals that it processed for something-or-other. There was going to be loads of stuff about damaging pristine environments, failing to respect native cultures and the nastiness of life in a corporate monolith. The reason we were given for it being turned down was that Mann himself was thought to be a bit too much like Judge Dredd.

Mikal: (and Jenni thanks for the research on PLR) Following this, I'm looking at registering for Public Lending Right.

Benjamin: Glad to know the longer articles are appreciated. I prefer to do entries that are about something (as opposed to "today I ar bin" stuff), though because they take longer, they tend to get neglected when I'm busy. The preponderance of longer stuff is an indication I've been having an easier time of it recently...

PaulHD: Cheers Paul, and yes, I always thought Nigel was sadly neglected by mainstream comics. That said, he earned about twice as much as me all the time he was working on Sonic The Comic :-)

Jenni: I posted the colour version of the photo here on the blog as a snapshot of stuff I'd seen when I was in Middlesbrough... I prefer the black & white one, but I thought it would jar with the other colour images in the blog. The black & white was intended to be more of a statement in itself.

I remember that building in 'boro. Used to stumble past it drunk on my way home from the Union.