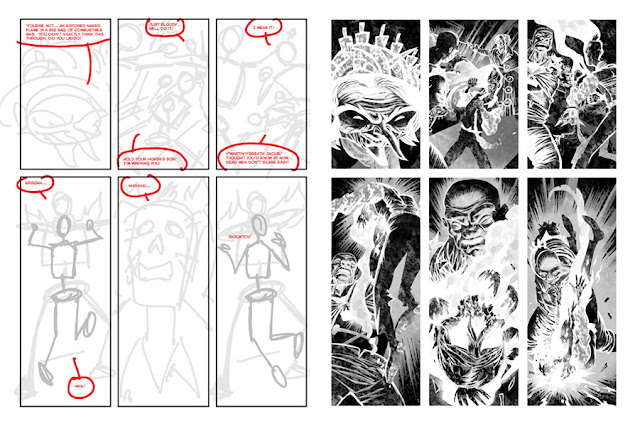 Original roughs for Part 11 Page 2 (left) with the finished article (right).
Note how the last three panels of the roughs give Black Bob his missing arm back.
Stickleback © 2010 Rebellion Developments/2000AD.
Stickleback created by Ian Edginton & Me.
It's funny what can slip past you when you're working full-tilt; Ian sent me the script for part Eleven which had gone through various drafts, been checked by Tharg-in-residence Matt Smith, and had got as far as my reading it twice, roughing it out in a sketchbook, repeating the exercise on computer, and starting the rough pencils before any of us noticed that the sequence where Black Bob kills Fiery Jack includes lines such as "Bob reaches out for Jack with both hands…" and "Bob tightly clamps his hands either side of Jack’s head." The problem being that we'd seen Bob lose an arm two episodes before. Still,  it all got sorted easily enough… and I can't exactly point the finger because last time it was me who forgot that a character has a severed arm. 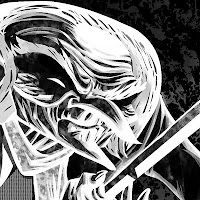 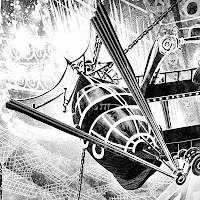 Based loosely on the design of the old RNLI lifeboats. 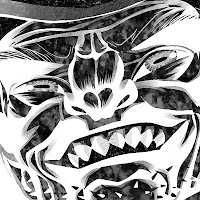 Mister Estebez final transformation is meant to reveal him as an agent of pan-dimensional nasties, just like the false Buffalo Bill in Stickleback: England's Glory. The goat-like facial transformation harks back to the character of Wilbur Whateley from H.P. Lovecraft's 1928 short story The Dunwich Horror. 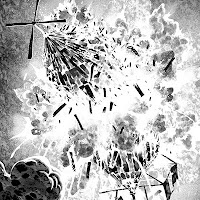 Having grown up watching various Gerry Anderson televisions series, I'm a bit of a connoisseur of pyrotechnics, and I knew what I wanted for this shot. The obvious reference would have been the wreck of the Zeppelin Hindenburg in 1937, but that was really a sudden and all-consuming conflagration whereas I wanted an out-and-out violent explosion. My source of inspiration was the truly prodigious pyrotechnic and breakaway model work overseen by special effects director Shinji Higuchi for the 1999 film Gamera 3: Iris kakusei (Gamera 3: Revenge of Iris). 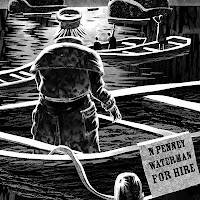 A brief cameo for the crusty old river rat from our War of the Worlds sequel Scarlet Traces. 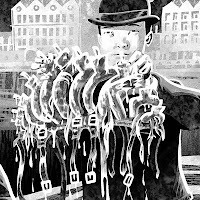 There's a hint that Stickleback's deformity is a prosthesis as far back as Stickleback: England's Glory Part Eleven. 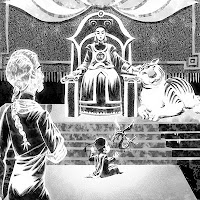 The White Lotus Empress (who is our female equivalent of Fu Manchu in the Stickleback universe and the only human being Stickleback seems to be afraid of) first appeared in Stickleback: England's Glory Part Twelve, when she came to the rescue with her giant dragon. Her son - the product of a union between herself and Stickleback - was mentioned briefly in the same episode.
The Empress and Miss Scarlet have some history, since Miss Scarlet was tasked with requesting The Empress's help in Part Six of the same story.
Posted by Unknown at 3:59 pm

Wonderful finale to a great series, must say I have never thought of you as an action artist before but there were some fantastic fight scenes in this especially with Bob. That drawing comics the Marvel way you got must have unleashed your inner Buscema.

Glad you think so, James - I have been trying to push the "dynamic anatomy" a bit more in this one...

Thank you for a wonderful series Matt and, as ever, an invaluable set of notes to help us get even more out of this fantastic story!

Any chance of a bonus post featuring your cover for prog 1676 too?

Your wish is my command - check in on Monday for a post about that cover!

Why, thank you sir! I've just spent a wonderful Sunday mornin' in bed re-reading Sticklebacks one and two.