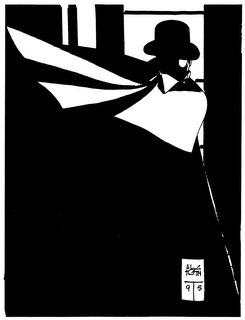 It was from Diplodocus Peacocks' photostream on Flickr that I found out, belatedly, about the death of Alex Toth.
One of the great draughtsmen of comics, Toth was also one of those figures about whom a "but-" always hangs like a black cloud. For all his great ability, Toth never worked on material that reflected his talents; so unlike his contemporaries, Jack Kirby, Gil Kane and Joe Kubert, there are no great Toth characters, no body of work that can act as a fitting epitaph. There are a couple of volumes of reprints, mostly sketchbooks with the odd strip thrown in, beautiful to look at "but-" not much of a read, if truth be told (that said, they're more than worth picking up for the beauty of the drawings alone - as an all-round Toth Source-book, I thoroughly recommend Manuel Auad's Alex Toth Black & White , from which the above illustration is taken).
The brief epitaphs on the Internet seem to put this down to Toth's reportedly "difficult" character and unwillingness to compromise, yet these qualities could also be said to be true of fellow great outsider Steve Ditko, who co-created Marvel's signature character, Spiderman, and went on to create The Question, Mister A and The Creeper in a career that determinedly pushed farther out into the wilderness with every passing year. Ditko can even be said to have introduced a new form to American comics; the Polemic Comic, characterized by his collection Avenging World, in which the narrative comic and the diagram dance a libertarian waltz across the pages, and the raising of taxes to pay for free medical care for children is likened to highway robbery.
Out beyond the limits of commercial publication as Ditko now is (he effectively has to self-publish), he will leave a legacy which is strikingly and distinctively his.
Perhaps Alex Toth simply wasn't a distinctive enough writer to become a Ditko. If so, he never found a Stan Lee to plug the gap for him. Either way, that nagging "But-" still remains.
And it was that "But-" that led me to Toth in the first place. Spotty and in my teens*, I remember reading an interview with Brian Bolland about his then up-and-coming strip for Escape magazine, "Mister Mammoulian," wherein he mentioned that he wanted to create something of his own in order to (quoting from memory) "avoid ending up like Alex Toth." That comment stuck with me, and although it was many years before I was in a position to pick and choose projects, I've worked with an eye to making something that was distinctively mine from the very beginning. Eighteen years on, I have a small library of books in print with Dark Horse, with more coming out this year from Rebellion, most of that due to my partnership with my own House of Ideas, Ian Edginton. The rights to a body of my early work from Deadline magazine revert to me next year, and I'll be looking to get those back into print too.
I have many friends in comics who have, and continue to, make a far steadier living than I ever have, but all their work belongs to others. Owning your own material can come with a heavy price, too, because a publisher will never give you as much money upfront for a creator-owned deal. Comics is a marginal business, and the days of big advances are long gone; last year, a poor dollar conversion rate meant that my cheques from Dark Horse were barely covering my outgoings. Nevertheless, if I possibly can, I will weather such storms for this reason; I want a body of work that, however poor, is unique to me; my little scratched graffito on the cell wall of life.
And for that determination, and the results therefrom, I thank Alex Toth, as much as for the beautiful art he created over the years.
No "Ifs," no "Buts."


*as the result of a financial settlement with my paternal grandparents, I agreed never to be "a teenager."
Illustration © 1995 Alex Toth, from Alex Toth Black & White, Auad Publishing 1999, ISBN 0-9669381, used here for review purposes under the Copyright, Designs and Patents Act 1988
Posted by Unknown at 2:56 pm

Alex toth pronounced tooth,was a great artist his fine pencil work as can be seen in the 70's for warren comics "creepy & Erie" and his black and white chiaroscuro work later,shows he was an adaptive artist like breccia,but it is true he never had that 1 classic work like a classic album pet-sounds /beach boys he did have a few great singles......