The Careful Art Of Playing With Other People's Toys (Nearly)

One of the great things about my job is the number of opportunities I get to nourish my inner ten-year-old; in fact, one came about two months ago, when I was drawing the voyage to Mars for The Great Game #2.
I had to design a troop-carrier rocket for the long journey, and while earlier rocket designs for The Great Game had been inspired by classic needle-type 50's designs (such as the rocket from The Quatermass Experiment), this sequence (where we show in detail all the stages of the flight from Earth to Moon to Mars) seemed a natural opportunity for a tribute to the "launch porn" sequences from such Gerry Anderson TV shows as Thunderbirds. By happy coincidence, my favourite childhood spaceship (yep, I was one of those boys) was the giant Mars probe Zero X from Thunderbirds Are Go/TV 21, so that was the natural inspiration. 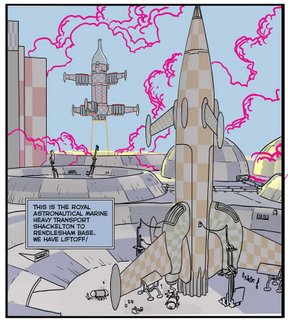 Troop carrier takes off from Rendlesham Spaceport with Quatermass-style RAM Cruiser in foreground, half-completed inks over rendering from 3D program.
The coloured lines indicate detail that will be painted in rather than drawn (smoke and flames in this case).
The chequer effect on the CGI makes it easier to drawn in additional detail by hand.

When you're working professionally, you have to be careful treading the line between "tribute" and "plagiarism," but luckily, the script called for an upright Apollo-style rocket, whereas Anderson's Zero X took off horizontally from a runway on two pairs of detachable wings. By taking details from the original and transferring them to the new upright design, I think I've made something which will evoke the original for those in the know. 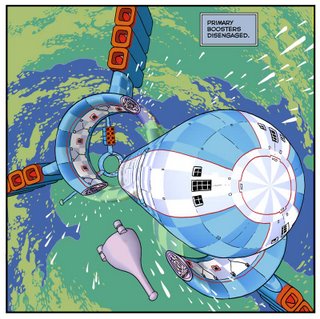 Troop carrier separates from nose cone and lifting bodies over the English Channel,
half-completed inks over rendering from 3D program.

Incidentally, did anyone else find it odd that the Zero X used a heat-shielded nose cone for take-off, but not when re-entering the Earth's atmosphere? And does anyone else find it worrying that I'm still thinking about this sh*t when I'm pushing forty?

Hmmm, which comic reader is going to cast that stane first? None of us have grow up!
Lovely art again, I have very weak Anderson knowledge but I am reminded of Frank Bellamy's Dan Dare stint and his Anderson stuff, very good company!
Nice cover too.

Uh, don't know what a 'stane' is, 'stone' with a northern accent?

Hmmm... sounds more Rev. Ian Paisley to me, I can hear him hammering out in his best "teeth will be provided*" voice, "Lot hem huy ez wethoyt sen cost the furst stane!" though in truth that's probabbly got more to do with the Biblical language than the phonetics :-)

*From the following joke by Dave Allen:
The Rev. Ian Paisley is delivering a Hellfire sermon one Sunday.
Rev. Ian Paisley, "...and the fallen will be cast down into the fiery pit, and there will be a wailing and a gnashing of teeth!!!"
Old lady in the front row, "But Reverend Paisley, I haven't got any teeth..."
Rev. Ian Paisley, "Teeth will be provided!!"

Well, my inner ten year old is nourished thanks to these images you're posting. Which kind of reminds me of this quote:

"Despite my ghoulish reputation, I really have the heart of a small boy. I keep it in a jar on my desk." -Robert Bloch