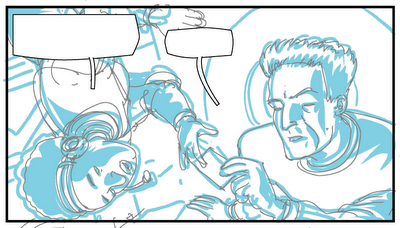 It's always struck me as funny that, on the whole, comics shy away from showing characters in zero gravity. You can understand it in film, for though modern effects have made it possible to do protracted free fall sequences (think Apollo 13 and Red Planet), it's still a budget-stretching exercise and presumably awkward to film; with comics there's no such restriction.
Even so, there's been a tendency to stick with the convention of artificial gravity (a short scene in Bring Me Liberty being the only exception that leaps to mind), possibly because of a fear that the zero-gee environment would distract from the storytelling.
Ever in search of new ways of spicing up talking heads sequences, I decided to use free fall in the last part of the Great Game. The scene in question is mostly exposition, and there were some worries the effect might be too distracting (when I introduced the idea, Ian asked me if I'd consider having the characters wear magnetic boots), but in fact it seems to work okay, and it has one unexpected benefit; having the characters able to drift around freely makes it a lot easier to fit the speech balloons in :-)
Posted by Unknown at 1:12 pm

Hi Jeremy, hope you didn't mind me adding your site to my links, I'm not sure what the etiquette is in these situation...