The Precarious New Perch Of Goldmine The Lizard

My poor old 17" Apple CRT monitor has finally given up the ghost. It's foolish to get sentimental over inanimate objects, I know, but it's been part of my daily working life for the past five and a half years, seeing me through most of the work that's made my name, including Scarlet Traces, Leviathan and WOTW as well as most of my Dredd stories. Sadly, it has to go; it's developed an increasingly-less intermittent fault where the picture will suddenly become vertically compressed like the title sequences in old pan-and-scan movies from Sunday afternoon television in the 1970's. 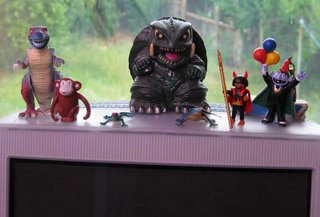 I was dreading having to find a replacement; CRT monitors are becoming rarer than hen's teeth, and my experience of LCD screens (from my laptops) was not vastly encouraging. After a bit of research on the Internet I was persuaded enough that technology had moved on to take a chance on a 19" TFT monitor by Formac, a German company whose excellent Firewire hard disks have been entrusted with my archives for the past year or so. I took delivery today, and picture quality is as good as my old monitor, there's none of that contrast-shifting that plagues my laptop screen, and the styling is pretty Mac-like (you can get them in a variety of finishes to match your particular Mac if you care about that sort of thing; I went for iBook white because it was cheapest).
This left one last problem - given that the new monitor is much thinner, where will the Colony of Guardian Toys that lived on top of the CRT now live? 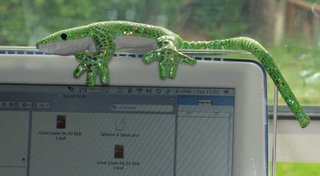 They've had to shift to the top of a nearby bookcase, and the cast of thousands (including Gamera, Playmobil Devil and Mister Wingéd Frog) have given way to Goldmine The Lizard, who finally gets to embrace his destiny; Jeremy Dennis bought him as a monitor lizard for me back in 1999.
So now, instead of being peppered by a shower of lightweight plastic toys every time I knock my desk, there's a satisfying thud as Goldmine's glittery, sand-filled body hits the deck.
Bliss.
Posted by Unknown at 1:26 pm