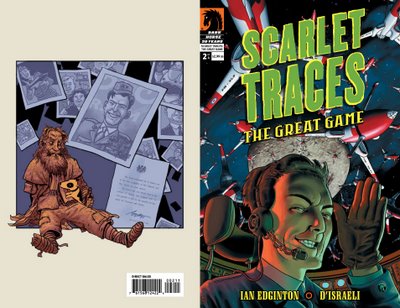 On returning from Scotland, I found a preview copy of Scarlet Traces: The Great Game #2 waiting for me. I'll be interested to see if people notice a shift in style between this issue and the last; they were done eight months apart, and I’d drawn the whole of War of the Worlds in between.

Last time I got my preview copy about a week before the issue hit the shops, so keep an eye out from next Monday...

I'd like to apologise in advance for the cover; despite carefully planning it from the beginning not to be too busy, and spending ages fiddling with the colouring so it wouldn't be too dark, it's - you guessed it - too busy and too dark. Cover art is simply not one of my strengths...

It's also an example of how the needs of the distribution system drive production... because Previews needs covers months in advance for solicitation, I had to do this cover well before issue 2 was written; Ian and I put our heads together and came up with this, since it's the episode where Charlotte heads to Mars, but in fact the significant part of this issue ended up being about Autumn and what had happened to him since Scarlet Traces (thus the back cover). Dravott Jr. here doesn't really take the stage until the very end of issue 3, so this image would have fitted issue 4 better than issue 2. If we use these covers as chapter headings in the collection, I may see if we can swap 'em round...

One final thing: as of last night, there are only six pages of issue 4 left to complete.
Posted by Unknown at 6:45 am

I really liked the cover to this for all its darkness and business (I love the rockets in the background and the underlighting from inside the cockpit).

Super art work! I hope that poor old Robert Autumn hasn't been on a drinking binge for thirty years though. Perhaps he should pick up on finishing the memoirs left uncompleted at the start of "Scarlet Traces".

Commander Dravott looks like a much smoother villain (or hero?) than his unlamented thug of a father.

Issue 2 in the shops in the UK today - assume the US yesterday - and it's looking v.nice as always.

Couple of things. Love the Kettle ;-) And do I detect a bit of influence from the Dan Dare "Man from Nowhere" are in the latter stages of the issue?

"Anonymous" - funnily enough, I only recently finished drawing the flashback where you find out what finally happened to Dravott Snr.

Dankell - Thanks for letting me know, I'll spread the news.
We had fun with stuff like the kettle - the entrance door to Autumn's hideout, with a release button hidden in the "O" on a poster, is a little tribute to the film Daleks Invasion Earth 2150AD - in fact the message Susan & Victoria leave for the Doctor in the film, is just visible on the inside of the open door in page 2 panels 5 & 6.
I also filled Autumn's den with ornaments and nick-nacks from his study in the original Scarlet Traces .

Re Dan Dare - when Dark Horse asked us for a snappy description of The Great Game for publicity, Ian and I came up with "George Orwell's Dan Dare," only to discover that no-one in America had heard of it :-) So Frank Hampson's favourite son was an influence, particularly the space helmets, and yes, the trilateral starship from Man From Nowhere was (along with the eponymous ship from Fireball XL5 and the rocket ship from Quatermass Xperiment) an influence on the RAM cruisers seen on the cover. The Shackleton transport ship is a tribute to the Mars probe Zero X from the film Thunderbirds Are Go! - the moonbase is based on the one from Quatermass 2, and the wing-shouldered spacesuits were inspired by the ones in Quatermass Xperiment.