What'll I Do When You Are Far Away, And I Am Blue? 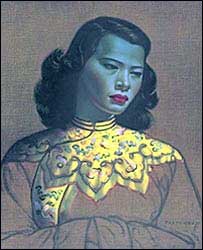 I discovered today, with some sadness, that Vladimir Tretchikoff, painter of The Chinese Girl, the best-selling print that adorned so many 70's lounge walls, has popped his clogs. A slightly odd admission, perhaps, as I'd not heard of Tretchikoff till I saw his obituary - in fact it wasn't till yesterday it ocurred to me that such a mass production icon was actually painted by a known person (as opposed to, say, a team of kitschnologists in a plant in Taiwan somewhere).
Tretchikoff joins that pantheon of anonymous creators whose work somehow strikes a chord with millions - the other obvious example is Alberto Korda, the Cuban photographer whose photograph of Che Guevara was the basis of the poster that was almost mandatory decoration for student bedsits in the late 60's, and who died in 2001.
I wonder how Tretchikoff saw The Chinese Girl - did he think of it as his best work, or did it eclipse the paintings he was really proud of? Either way, I'll always have a grudging fondness for it, if only because it gives the lie to what my secondary-school art teacher was always telling us - you can go far without learning to mix flesh tones.

"you can go far without learning to mix flesh tones."

I always hoped this was true, thank you for bringing me proof.

" you can go far without learning to mix flesh tones'

WHAT! - you mean everyone isn't blue?