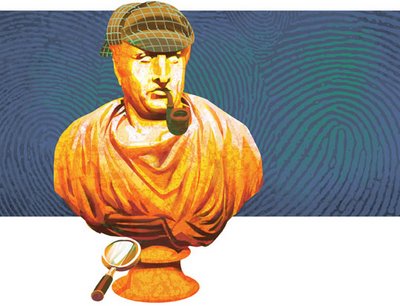 Marcus Tullius Cicero: "I suppose you're wondering why I gathered you here today... it's to point the finger at the fiend who stole my arms."

Still in a state of fall-out from The Great Game this week; been sleeping a lot, catching up with my reading, and seeing old mates. I've also started looking at odd things I'd promised to do for people when I wasn't "too busy" - and much as I'd like to spend the whole of the lull between The Great Game and Stickleback sleeping, I'd thought I'd better honour at least some of my promises.

One such was an illustration for an article by my belovèd, the erudite Dr. F., on the parallels between the defence speeches of Marcus Tullius Cicero and modern detective fiction for the schools classics magazine Omnibus - hence the combination of the "classic" Cicero bust with the iconic Holmes deerstalker and pipe. It's all come out a bit A-level art project, I fear, but jobs like this are a good chance to play around in a way I feel reluctant to with commercial work. It also taught me a few things I'm filing for future reference, technique-wise.

I also took a day off to go visit my old friend and former colouring mentor Steve Whitaker (probably still best known for his work on V for Vendetta). Steve has my old computer, so every so often I pay him a visit to catch up and also do a bit of tech support. We had lunch in a restaurant with a stained-glass ceiling, which produced lovely reflections in the cutlery. Very appropriate for a meeting of colourists.

Steve's one of the few old-school colourists left with whom I can play the "Coding Game" - this is where we name the colours of things according to the old comics colourists' coding system, which fell into abeyance sometime in the mid-late nineties. So for example, when Steve asked me how much milk I like in my coffee the reply would be "make it Y6 R4 B3," that being the colour I'd like it to go. It sounds complicated, but once you've done enough coding (and Steve did loads more than I) it's pretty easy to approximate. I've seen designers do it with Pantone swatches.

There's a lovely Magnetic Fields song called Reno Dakota in which is sung:

Actually I apologize for the facetiousness of that last post. As we all know, Pantone Metallic Coated swatches don’t contain a 292. Sorry.

Hmm, I would imagine Uncoated is most likely but I don't want to second guess Stephin Merritt's intentions.

And it'd be a bugger trying to make "Pantone Solid To Process Coated EURO" scan.