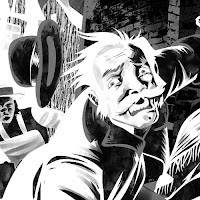 Page One: "Mister Bond"
There's no way of getting this one from the strip itself, but in the script, Ian refers to the British agent who appears in the opening sequence of part one as "Bond." 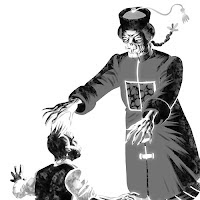 Jiang Shi or Chinese Hopping Vampires
Introduced into Western popular culture largely by the 1985 Hong Kong action film Mister Vampire (Geungsi Sinsang), the Jiang Shi (literally "stiff corpse") is an animated cadaver driven by the animal urge to consume the chi, or life essence, of living humans. In many ways, Jiang Shi are more like Western zombies than vampires; they are brainless, incapable of speech, driven by hunger, and, in some versions, continue to decay after resurrection. Their characteristic stance, (with arms stiffly outstretched) and strange hopping gait, are due to stiffening of the limbs caused by rigor mortis.

Page Two: Death By Eyebrows
A nod to Tsui Hark's wonderful mad-as-a-fish-in-a-privet-hedge 1983 Hong Kong action classic Zu: Warriors Of The Magic Mountain (Suk san: San Suk saan geen hap). In particular, to the moment when the sorcerer Long Brows captures a demon by binding it in his eyebrows (!). 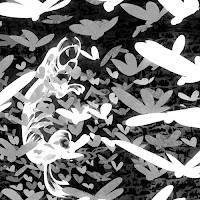 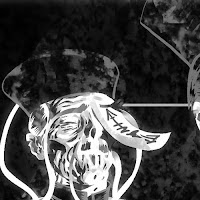 Page Five: Sleepy-time
As all good fans of Mister Vampire know, a Jiang Shi can be can be put to sleep by sticking on their foreheads a piece of yellow paper with a spell written on it. A sleeping vampire is still mobile, and can be persuaded to follow the sound of a bell. 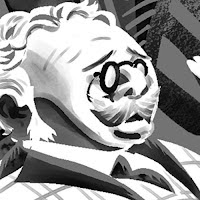 Page Six: Mister Tickle
A new member of Stickleback's inner circle, Mister Tickle's appearance is loosely inspired by Richard Attenborough's performance as Albert Blossom in the 1967 film Doctor Doolittle. The name (for which I have no explanation) presumably alludes to the successful Mister Men children's book series by Roger Hargreaves. 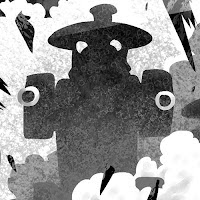 Page Nine: Traction Men
A nod in the direction of the Japanese powered robot suit or Mecha, Ian and I thought it would be fun to have our own steam-powered Victorian version. The Traction Men are an anthropomorphic combination of tank and troop carrier; up to five men can fit inside the belly. The legs and upper torso are powered by two separate steam boilers. Armament includes cannon in the "arms" and two Gatling guns mounted in the "head."
To give them a bit of character, I gave them "faces" based on an old-fashioned steam engine (Oliver Postgate and Peter Firmin's Ivor The Engine, to be precise), with a giant World War One Tommy's helmet plonked on top. The buffers were replaced with Gatling guns.
Posted by Unknown at 5:57 pm

Love the way that you see the Traction Men all wrapped on their trucks as we "pan" into the opening with Stickleback and his crew...

The next prog's far too far away...

Great stuff, but so long to the next installment.

I thought that was sergeant Cuff with The Moonstone at the start, looking too hard for refs I think!

dankell - a lot of the pacing is down to Ian's script, but we did try and go for a slow buidl-up on that sequence (as slow as you can manage in five pages, anyway).

anonymous - Hmmm... good idea... don't be surprised if we use that in the reference section for the first collection :-)