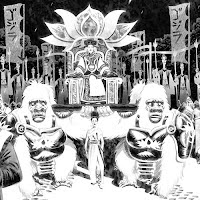 The Empress of the White Lotus is a female analogue of Sax Rohmer's Eastern über-villain Doctor Fu Manchu - a character of singular purpose and unlimited cruelty, she's the only person we've so far encountered that Stickleback actually fears.

The "White Lotus" refers to the Hong Kong martial arts film Clan of the White Lotus (aka Fists of the White Lotus/Hong Wending san po bai lian jiao/Hung Man-ding saam por bak lin gaau). The film features the "white eyebrow priest" Pai Mei who was used by Quentin Tarantino in the film Kill Bill 2.
The lady bodyguard marching before the throne of the Empress is based on actress Reiko Ike. 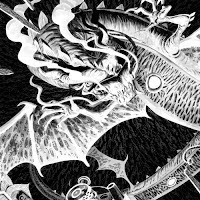 In Western folklore, dragons are straighforwardly monsters, usually voracious and destructive, though recent fiction (notably Anne McCaffrey's Pern novels) sometimes puts them in a more positive light. In Chinese and Japanese mythology, they are often portents of great power or good fortune.

Physically, our dragon is halfway between the Western model of a kind of bat-winged dinosaur, and the graceful Eastern long-bodied variety. The second pair of wings that hold up the tail are a nod to the exotic multi-winged giant insects of the Rotwood in Hiyao Miyazaki's seminal manga and anime Nausicaä Of The Valley Of Wind (Kaze no tani no Naushika, manga: 1982-1994, anime: 1984) 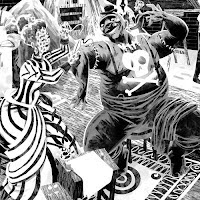 The blank sheet of paper on the sewing table in front of Rose and Bob should have been the same copy of Titbits as seen in panel one (with the headline about the Wild West Show burning down .)
I'll see if I can get that page fixed for the collection (due August 2008, apparently). 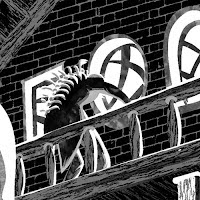 In the final page of this story, Ian wanted Stickleback to be seen staring out of an exotically-designed circular window reminiscent of the one found in the attic of the Greenwich Village home of Steve Ditko and Stan Lee's sorcerer supreme, Doctor Strange (Marvel Comics, 1963-present). Rather naughtily, I added a square and an arched window, in tribute to the classic BBC TV pre-school children's programme Play School (1964-88). Although studio-bound, each episode of Play School featured a short segment filmed out in the real world; these were viewed through either the Round, Square or Arched window, the audience being invited to guess which window would be used before the segment ran. This format has been borrowed by other television programmes since, most notably Teletubbies (1997-2001).
Posted by Unknown at 4:38 pm

Congrats on the Eagle award nominations!

As I can't follow 2000AD much, I'm going to assume this'll collect all the Stickleback you've worked on so far?
Thanks for all the great stories!