The Vort Part 1: Back to the Future

Jeep-Beastie from page one of The Vort
The Vort © 2008 Rebellion Developments/2000AD
Created by G. Powell & Me.
2000AD Prog 1589 is out and with it episode 1 of The Vort. This series has an unusually short lead time; I'm still working on the last 2 parts. I usually dread having anything come out while I'm working on it, for if the job doesn't come out as intended, it becomes very hard to stay motivated. Luckily, episode one has printed exactly as I envisaged. I was more nervous about this episode than most of my recent colour stuff, because I was trying some new techniques, and there's always the possibility that can turn round and bite you. 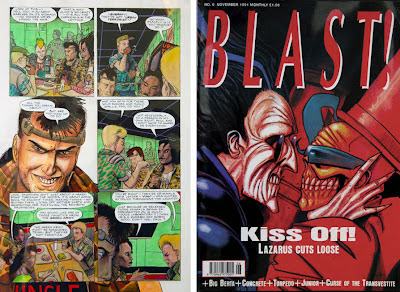 Well, I say "new" - in fact, I'm recapturing a way of working I first devised for painted artwork back in the late 80's. On my first colour job, I'd found that my colouring was very slow and inconsistent; I was working by adding colours to white paper and the simple business of deciding what colour to pick for each object in each panel was taking me ages. I decided to try and work out a system to let me produce colour in a consistent way at a faster pace.
I found I worked best if, instead of trying to put colour onto white paper, I covered the whole page with a glaze of mid-tone colour, then used paint and crayon to pull out highlights, and added transparent glazes for shading. The combination of underlying colour and shadow colour helped pull all the colours in an image together with very little effort.
At first I painted over my inks, obscuring them a little and giving the whole thing a more painterly look. Later I took to painting over the pencils and inking onto the paint; this isn't as difficult as it sounds, but it limits your options for making mistakes in the inking! With some variation, this was the method I used for Lazarus Churchyard and Kingdom Of The Wicked, and that method of thinking about colour has served me ever since. 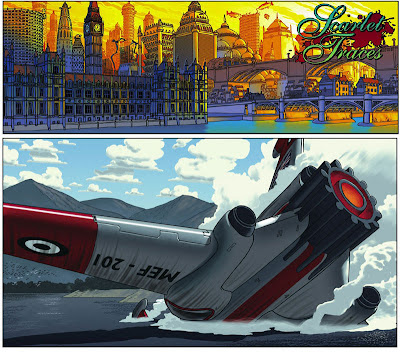 Top: In this panel from Scarlet Traces (2000), I still working mostly with flat colour and simple gradients - a technique left over from the time before I had a graphics tablet. Bottom: By the time I started Scarlet Traces: The Great Game (2005), I was able to think about a more painterly approach - but the technique was slow.
Scarlet Traces © 2008 Ian Edginton & Me

When I first switched to computer colouring, I didn't have the technique to recreate what I'd been doing with paint; later on, as I got more sophisticated (and got a copy of Corel Painter), I was able to do more painterly stuff (see the first 10 pages of Scarlet Traces: The Great Game) but the trouble is, I'm not a natural painter, and I become hesitant when I have to paint rather than just colour in. If that seems a bit obscure, the difference is, with colouring the black of the drawing takes care of the dark areas; with painting, you add the dark tones in colour and I find that really difficult for some reason. Short version: every time I try and paint, I'm damn slow.

When I came to do The Vort, I was trying to think of a new approach. I didn't just want to repeat what I'd been doing with Scarlet Traces, proud as I am of it, but I needed some way of working quickly enough to meet my deadlines. The answer struck me when I picked up a copy of Ralph Steadman's book I Leonardo; here was a guy producing elaborate colour work which is strongly rooted in drawing as much as painting. The controlled chaos of Steadman's work reminded me of something I'd idly noticed when finishing the drawing stage of my comics in Illustrator. 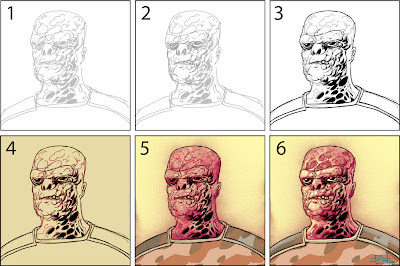 When I draw on computer, I go through about four stages from blank "canvas" to finished drawing; there are 2 stages of roughs, a "pencils" stage and "inks." Each stage is drawn in a darker grey and a finer line than the one before; the first roughs are a very light grey, the "inks," of course, black. Before I export the inks to Photoshop, I make a copy of the file and delete all the unwanted layers. Sometimes, before I do this, I switch on all the layers, and you get a sort of dark halo around the inks where all the previous stages are visible. Sometimes too, you get "ghosts," where I've included stuff in the roughs that have been changed at a later stage in the drawing. I realised that if I exported the rough layers and made them transparent, they could add just the slight organic, chaotic edge I was looking for, without any additional effort.

Better still, it gives the work more of a "painted" look, but it's all done by drawing. 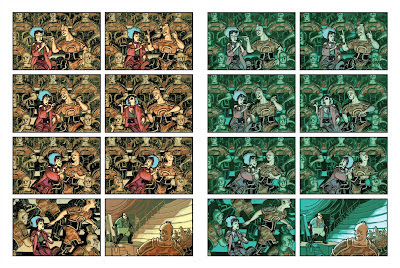 My first try was page 3 (the scene with Bless and Veldt in the audience at the speech-giving). For various reasons, this page took me ages, but by the time I'd got it finished, I'd made my mistakes and knew where I was going. In fact, the thing that really persuaded me the technique was good was when I realized I needed to change to colour scheme on the whole page, and managed to re-colour it in half an hour flat!
Posted by Unknown at 11:19 am

Page three for me has a really creepy old horror film vibe with those colours, and thanks for the mini tutorial on your processes as I still find working digitally a real mystery!

Love reading about your process. You're one of the few people in comics using Illustrator. Keep them coming.

Ullo, Matt. Am liking very much your VORT. It does take me back to your early 'hand-painted' stuff, but with that added 'other', which makes the whole thing look top-mod new.
I always love to see what you do next, you never stand still with the form, and never disappoint. And, you should put out all your tutorials and working methods in some 'how to/reference' book, few make it as clear and concise as you, but, you are part Vulcan.

Have you written the script for this as well, Matt?

Thanks for this, Matt. I love to know how other artists work, and pick up handy tips and perhaps be introduced to a process that hadn't occurred to me before. As always, your descriptions are concise, interesting and easy to take in.

Fantastic stuff! Really appreciate you putting the time in to explain your technique in an honest way. I got introduced to your work with Scarlet Traces and what hit me first with that was the way you treat colour. IMHO your the best colourist the is in comics.

I could identify with your comments about colour e.g. '..but the trouble is, I'm not a natural painter, and I become hesitant when I have to paint rather than just colour in.' I have a similar problem in that I find it very difficult to approach colour head on so I have to find some prop with which to attack it. So I end up producing line drawings which I then basically colour in. The URL above for my name shows the last image I worked on in this manner.