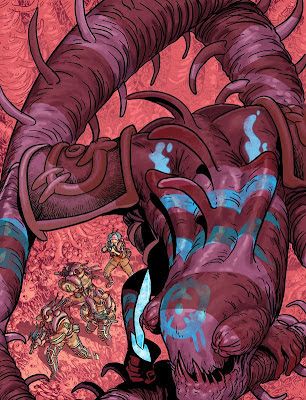 Menaced by the Frogs... cover to 2000AD Prog 1590
The Vort © Rebellion Developments/2000AD
Created by G. Powell & Me.
The Vort part 2 is upon us, with my 5th cover for 2000AD (shown above, in all its unlettered glory). This episode also contains two further minor landmarks for me. Though they're "blink-and-you'll-miss-them" small, those pages contain my first drawings of bare breasts and someone weeing in a mainstream comic (see below). If my mentioning this seems a bit like a vicar's giggly virginal middle-aged daughter congratulating herself on daringly using the word "bum," well… I suppose you're right. 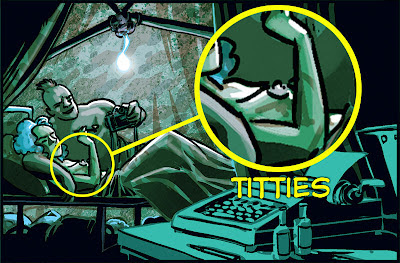 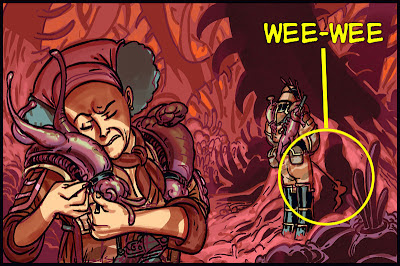 Naughty bits: top: page one, panel one, bottom: page three, panel four
The Vort © Rebellion Developments/2000AD
Created by G. Powell & Me.
Of course, I drew naked folks and all sorts of nastiness in Lazarus Churchyard, waaayy back in 1991, but a) Warren made me do it and b) doing this stuff in 2000AD feels like a bigger deal, because I can't help but think of it as the comic I read as a child. In fact, I've always referred to the IPC/Fleetway/Egmont/Rebellion (pick an era) hands-off editing style as "scanning for tits and willies" (since you'd often get no feedback at all unless there was something objectionable to be changed). It usually was "tits and willies" too, since while 2000AD has pushed the boundaries in a number of ways over the years, like all mainstream British comics it tends to be happier dealing with violence than sex. Before the introduction of female judges in the early 80's, even significant female characters were next to unknown in British action (aka "Boy's") comics; Professor Jocelyn Peabody from Dan Dare is the only one I can think of. Alan Moore really broke through with The Ballad of Halo Jones in 1986 (especially book 3, a war story with a predominantly female cast that even fits in an elliptical reference to menstruation). John Smith, too, has to be credited with introducing sexually liberated female characters (Tyranny Rex and Pussyfoot Five) along with allusions to all kinds of sexual themes.
And most recently, of course, we've had Simon B Davis's "big purple willy" episode of Stone Island. Got to admit, that was a line I didn't expect to see crossed. Mind you, neither did Ian Edginton, who hadn't put it in the script (when he saw it, he rang me in a state of shock, wailing "there's a big purple willy right in the middle of my strip!" in a quavering voice. And him a married man, too.)

So, rather naïvely, I was slightly surprised to see such open references to Bless sleeping with Veldt in the scripts for The Vort. I mean, given the age of the average Earthlet these days, it's only right for us to admit that men and women engage in - let's not mince words here - horizontal interpersonal man-woman wibbly-wobbliness. For myself, I'm torn between sticking with visual solutions that allude to naughtiness without showing it (just because it's a fun game), and going full ahead to see if I can be the first artist to cross that final barrier and slip a spurting stiffie into 2000AD (pardon my French, vicar).
(After all, we're well behind Johnny Foreigner on this one; Jean "Mœbius" Giraud managed that trick back in 1977 in the Blade Runner-inspiring detective story The Long Tomorrow, which somehow even made it into Epic Comics' US editions without being censored).

It does make you wonder a little as to why images of willies have been so thoroughly banned for so long; after all, half of us come with them built in and the other half are probably going to find out what they look like sooner or later. Willies aren't especially pretty, but it's not as if the world will come to an end if we see the odd picture of one now and again, surely.

Except... since that last episode of Stone Island, the world economy has gone into a spin, there have been catastrophic natural disasters in Burma and China, food and petrol prices have soared, and violent youth crime has gone spiralling out of control. Coincidence? All I can say is, if, in ten years from now, you find yourself living in a landscape of shattered rubble and burnt-out cars, wearing a mohican and Mad Max-style bondage gear, and dividing your time between bizarre gladiatorial games and roasting dead dogs on a spit, you'll know who to blame, wont you?
Posted by Unknown at 5:10 pm

Wash your mouth out you guttersnipe you

and John Smith old perculiar 'Dead Eyes' that had a mass Stone Age shaggathon... that and the 2000ad board going down, tis the end of the world as we know it

Just a note to say how much I'm enjoying The Vort --

also, I've just reproduced that poem of yours about Cyd Charisse in my blog. Sorry about that.

More close ups of the really weird weapons please. I mean the actual weapons, not the ...

When i was young in school a classmate asked me to draw a naked woman for him. I didn't really know what one looked like so i drew what he described. In the end i was very embarrassed and a little ashamed of myself for doing it. Any time i have to draw something of the like, that same prudishness comes back to haunt me.

These Vort pages are simply gorgeous by the way. Loving the colours.

Truth be told though, while there was a massive willy on show in Stone Island vaginas are still a rare species in 2000AD.

I call that the Willy Conspiracy.

The Vort is brilliant, of course.

Ah ... how things have changed. One of my prized possessions is a rejection letter from 2000AD from the early 1990s telling me that my strip was 'wholly unsuitable for a family comic in that I had barely dressed women in it'. A year or so later, they invented Simon Bisley. Sigh. Still nice titties and wee-wee.

Unless disguised at aliens on the cover!

I wasn't reading 2000AD at the time of the Sex Prog, though I remember Chris Weston saying at his blog that he thought he'd wimped out with his Nikolai Dante contribution, yet it was still the filthiest thing in it.

I reckon 2000AD has the same problem as Marvel and DC have in the US: while the reality is the readership has grown up with the product, and might expect the comic to cater to them as adults, the publishing ideal is still that kids should be able to read this stuff, too, and therefore renew the readership. And yet, when the comic does admit its readership is exclusively adult, and runs something like Steve Moore's Valkyries strip, the backlash is usually prudish in the extreme.

It's a chin-scratcher, and no mistake.