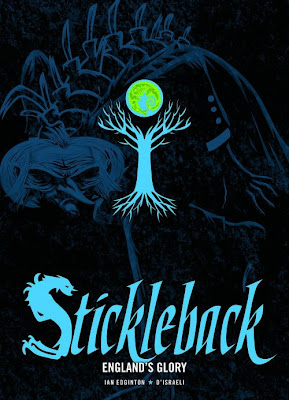 The Stickleback TPB is out - my complimentary copies arrived yesterday, and I'm pleased as punch with it. I'd initially been a little disappointed that we weren't going to get another hardback - they look so nice on the coffee table, dontchaknow - but the soft cover hasn't meant any compromise in production values. The cover's printed on matte stock, and the interior pages are glossy, with absolutely gorgeous repro - Stickleback must be a complete pig to print because of all the dark grey tones, but the production guys have done a fantastic job. All the light and dark tones of my original computer files show up on these pages in a way that the original progs never quite managed. They've also corrected a couple of minor lettering placement bloopers.

Oh, and don't be fooled by the name - despite being called Stickleback: England's Glory, it contains both series so far (Mother London and England's Glory).

If you're keeping an eye out for it in the shops, the cover looks more like the one above than the product image on 2000ADonline.com and Amazon.co.uk (I did the cover late, so they had to release a provisional design based on the first 2000AD Stickleback cover). 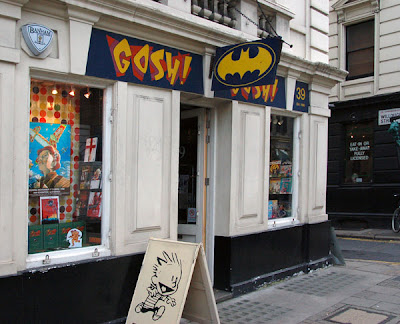 Gosh! Comics, Great Russell Street, London. See you there Saturday?
Ian and I will be doing a couple of signings for Stickleback this month - first up will be Gosh! in London on Saturday 16th August from 4pm-6pm*, then the following week we'll be signing at the Birmingham Forbidden Planet from 1-2pm. Full details below:

38 Priory Queensway
Birmingham
B4 7LA
Posted by Unknown at 7:01 am

Great! I am on holiday from Guernsey at the moment and will be in London that day!

Hey brother,
I was fortunate enough to buy a copy first hand at Comicon. I loved it and also love how your always taking chances with your art. I also picked up Xtinct (which was also great) and Liviathan. Keep it up brother. Now if you can get a collection of the Tupelo comics I'd be a happy man.
Peace,
Eraklis
http://illtiki.livejournal.com
www.sketchcharlotte.com

The Vort: please oh please tell me you will be collecting The Vort in Hardback or Trade soon?

Can't wait to read the whole tale, you've many admirers in The States!

David and His Boyfriend