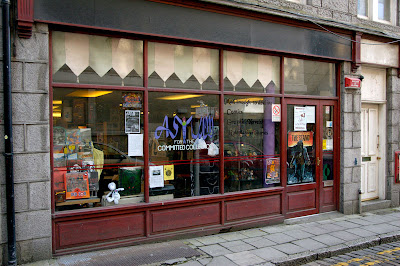 Asylum Books & Games in Aberdeen: the "temporary" logo I painted on the shop window back in 1999 is still just about holding up.
Thanks to everyone who turned up to the Saturday signing at Asylum Books & Games in Aberdeen, and to everyone who sent best wishes to Ian Edginton, who sadly had to miss the event because of ill health. Asylum's my longest-standing venue for signings, and it was good to see so many friendly faces again. 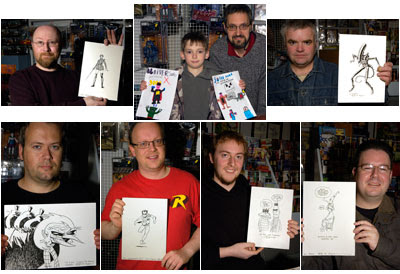 The big surprise of the trip was finding that Mike Mclean had not only shaved off his trademark beard, but his hair too, in order to go to the Hallowe'en night's festivities as Lex Luthor (his mate, introduced to me only as "other Mike," went along as Clark Kent/Superman). It was a treat following him that night, watching the blank looks followed by double-takes as people cottoned on to who it was.

Apparently, the Swiss theoretical physicists Bart and Barbey posited the existence of a chin under Mike's beard as long ago as the early 1990's, but it's only recently that technology has advanced enough for us to see actual proof of the phenomenon. 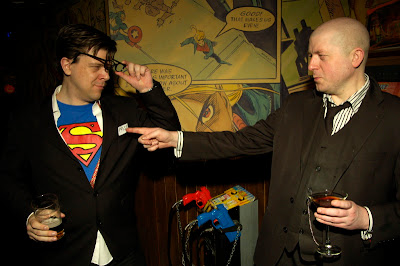 "Other Mike" and Mike McLean as Clark Kent/Superman and Lex Luthor
Posted by Unknown at 3:36 pm

Hi, just wanted to say thanks for the chat and those Illustrator brushes at Asylum.

Stickleback was most fun, that ink wash look is great for the feel of the period and I also liked all the cult reference. Nice to see the hopping vampires again.

Would it be ok to link to my blog? It's mostly about the film production stuff I do, with occasional off topic rants.