Alan Davis, Diego the translator and me in front of my poster at the Avilés comic festival in September 2008.
Photo by Javier Cuevas García-Hinojosa.

Only two months behind, I finally got round to sorting and posting my pictures from Avilés this year. It's a pity it's been so delayed because this year's festival had more big moments for me than most - for a start I was given the huge honour of doing the poster for the event, and I got to be in the same press conference as Alan Davis, being photographed in front of giant copies of said poster, plus the great Italian comic artist Ivo Milazzo came up to speak to me afterwards (though I was so stunned to meet the great man that I all I could do was witter like a pillock).

Left: my Avilés poster with text. And no, I'm not going to stop going on about it.

On the Saturday I flung myself down some stairs at the hotel, but it didn't kill me, and as a result, I met the lovely Kent Stout who later introduced me to her charming husband William Stout (who, among his many claims to fame, designed the original Predator costume). For more about my adventures in stair-diving, see here. 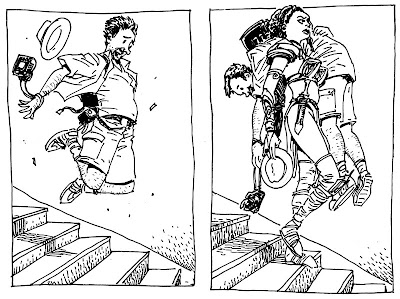 But, as a consolation, I won "Best Asturian Artist" at the awards (Asturias is the region in which the town of Avilés is located). Given that I'm from Sheffield and live in Nottingham, this was an unexpected honour. I suppose I must have made a good impression or something. This is a picture of the lovely award statuette (left).

And it sits proudly next to my Eagle Award.

I could only be present for the weekend (Avilés runs from Tuesday to Saturday), so I didn't manage quite as many sketches as usual, but I did remember to get photos of almost everybody this time round:

I think this is everyone who got a sketch from me in Avilés.
Click on the pictures to go the full-sized versions on Flickr.

I asked permission to Blog these, but if you'd rather your picture was taken down, just let me know and I'll remove it.

Thanks to everyone for being so nice about the slightly wibbly sketches I did after my stair-diving experience.

I've titled the photos based on names (if I know them or can read them from the dedications) or, failing that, the subject of the sketch. If you spot an error, leave a comment of the photo page on Flickr and I'll sort it out.

Thanks million for your time and talking!You´re a very nice person.
And thanks for my name below your picture with Alan!
Merry Christmas,