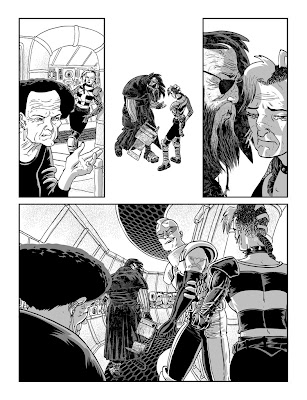 Page three of Lowlife: Creation part two.
Lowlife and associated characters © 2009 Rebellion Developments/2000AD
Lowlife created by Rob Williams & Henry Flint
The fundamental part of being a commercial artist is earning enough to cover the mortgage each month, but mere survival doth not an interesting career make. So each time I start a new project, I look for some part of my work that needs change or improvement. What could I do better? What can I try next? Some projects answer that for themselves. Adapting my computer-based art techniques to black & white comics (Leviathan), making talking dinosaurs emote (XTNCT) and building a skanky Victorian London out of found textures (Stickleback: Mother London) each filled up weeks of work with new and entertaining challenges.

With Lowlife: Creation, I knew I wasn't going to be doing anything technically radical (I wanted a bit of grimy texture in with the line drawing, but the technical challenges of that sorted themselves out in a couple of pages), so I was free to pick an area for development.

Something that's bothered me about my own work for some time has been my figure drawing. I always feel it's too stiff and clumsy; somehow I can never get the characters to "act" convincingly in quite the way I'd like to. I've been thinking on the problem for a while, but the solution came from an unexpected quarter.

Half as a joke, my belovèd, the bibliophilic Dr. F, bought me a copy of How To Draw Comics The Marvel Way.

First published in 1978, How To Draw Comics... is one of those books I've been half-meaning to buy since I first became seriously interested in drawing comics. It's based on a course on drawing comics put together by John Buscema in 1975; Stan Lee later wrote up Buscema's notes in his own inimitable style. The florid tone of the text is probably what put me off buying the thing for thirty years, but once you push past that, it's a goldmine of information on everything from basic drawing and page planning, right through to inking techniques.

Left: How To Draw Comics The Marvel Way by Stan Lee & John Buscema.

The section on figure construction was exactly what I'd been looking for. 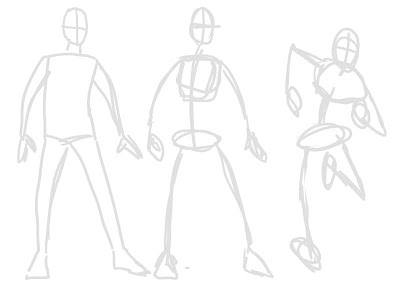 Above left: my old "skeleton" for constructing figures. Note the one-piece torso.
Above centre: John Buscema's figure construction "skeleton" sub-divides the torso into "rib-cage," "spine" and "pelvis."
Above right: This gives more points of reference for constructing figures in active poses.
In that chapter, Buscema shows how to build up a figure from a stick-figure "skeleton." All this was familiar enough to me in principle, but it turned out that Buscema's "skeleton" was just a bit more sophisticated than the one I'd been using in my own drawings. My "skeleton" used one section for the whole torso; his included a rough "ribcage" and "pelvis" connected by a "spine." This makes it much easier to draw the torso twisting or bending. 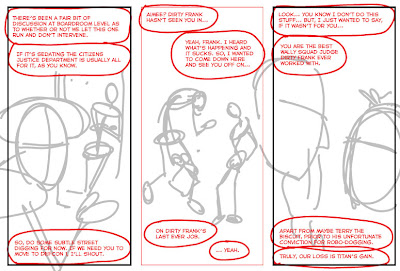 The first three panels of page four with the figures laid in using Buscema "skeletons." It was a lot easier to capture Aimee's casual slouch and Frank's hunch using this system. 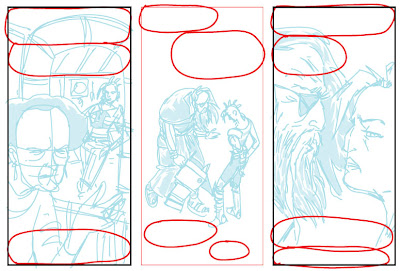 Rough pencils stage: the figure drawing is a little more expressive than my usual, I think. It was certainly easy to do. I just wish I'd stuck with the folded arms on Aimee in the first panel. 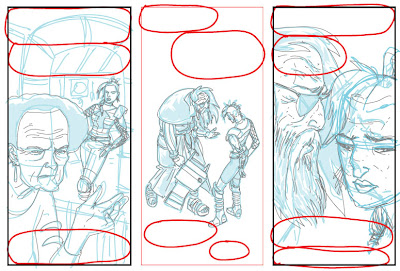 Pencils stage: Even at this relatively late stage I sometimes faff with the drawing - in this case I thought it better to have Aimee hide her feelings by turning her head away from Frank in panel three. Pre-planned doesn't mean inflexible.
As a result of using this new system, figure drawing's become much easier, and I think the results are a bit better too. I'll never be Neal Adams, but I do have a clear idea of how to make my figure drawing still more expressive and convincing in future. A bit of me wishes I had picked up a copy of How To Draw Comics... when I was eleven; the wiser part of me remembers you couldn't tell my eleven-year-old self anything :-)

I'm also going to have a look at my composition in the next job, although I always find those diagrams where they overlay drawings with geometrical shapes a bit hard to believe in. Still, per ardua ad astra and all that.

How To Draw Comics The Marvel Way is available from most comic shops, or dirt cheap from amazon.co.uk right now. Many libraries also stock a copy.
Posted by Unknown at 1:40 pm

Excellent, always a good sign of an artist that isn't just going through the same routine but is actively learning and growing with each illustration. As always Matt your work is inspiring!

Ahhh, loved that book when i got it back in the 70's.
Used to trace Buscema's Reed Richards full length shot endlessly, then creating my own characters over the top of it.

i got that book a few years ago. I thought it was great.
A few of my underground comic friends scoffed at my purchase, and maybe it isn't cool but I leart a thing or two.

That's how Steve used to teach this!

You're quite welcome to blat back for me not doing the download pdf's for the worms eye view of comics (that also detail this).

is that your old Dalek's corridor I spy!