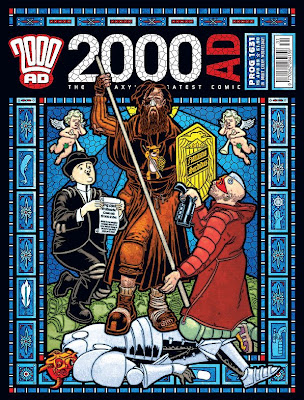 Cover for 2000AD Prog 1631 by me, with design work by Simon Parr
Lowlife characters and 2000AD logo © 2009 Rebellion Developments/2000AD
Lowlife created by Rob Williams and Henry Flint
I'm running late anyway, but I want to wait a bit before writing about the last episode of Lowlife: Creation to avoid spoilers; besides, I have something else I want to talk about this time.

I'd like to pay tribute to designer Simon Parr, whose work (credited to editorial droid "Pye-01") has been gracing 2000AD for some years now. For an artist, 2000AD is a bit of a dream job as far as covers go anyway - they have a policy of fitting cover text to the drawing, meaning that they'll leave out text if the cover design fills the space (so you're not having to leave blocks of random space in the drawing for cover text), and the logo's quite small and neatly tucked away, too - but a good designer still makes all the difference to the finished product.

Take the above cover - a stained-glass window motif suggested by Tharg-in-residence matt Smith. Simon requested a sample of the stained-glass background pattern I'd used in the illustration, applying it not only to the main 2000AD logo, but also dropping it into the red areas of the small 2000AD badge (top left) and behind the text on the issue number box (top right). Neat little touches like that really help to pull the design together; the smart use of the stained glass texture helps the whole cover to feel like a stained glass window without affecting the legibility of the small text.

So next time you look at any comic cover, take a moment to appreciate the effort that's gone into it, not only by the artist but also editor and the designer. The editor usually supplies the basic cover idea, and the designer's job includes choice of fonts, positioning of text, colour schemes that match or contrast with the illustration, and careful use of masking (effectively "cutting out" bits of text or logo so that parts of the illustration seem to fall in front of them). All these things take time and thought, and can have a big effect on the impact of the finished product.

Myself, I never find cover designs easy, so I find it incredibly helpful to have positive guidance from my editor and the support of a good designer. I've been very lucky to find that at several times in my career (I've previously thanked editor Dave Land and designer Amy Arendts for their sterling work on the graphic novels Ian Edginton and I produce for Dark Horse), and I'm glad to have it at 2000AD. Thanks for making me look good, guys.
Posted by Unknown at 10:19 am

...bit late for spoilers now. Thanks a lot for Creation and all the blogs that went along with it. It was absurdly fantabulous sir.

My most profuse thanks to yourself and Rob Williams. Lowlife 'Creation' has been an absolute joy to read and your blog posts have been great. Thanks again Maestro Brooker.

I just wanted to say how d'oh so very cool your Low Life outing has been Matt. Seriously the best thing in the comic in years...and I still haven't got the last prog yet! Really beautiful strip.
Congratulations.

Hey Matt what became of the 'demonstration head' you drew for my students? Did it wind up in the finished piece or did you have to redraw?

Pye's painted a couple of covers too, recently. And spiffing they were too.