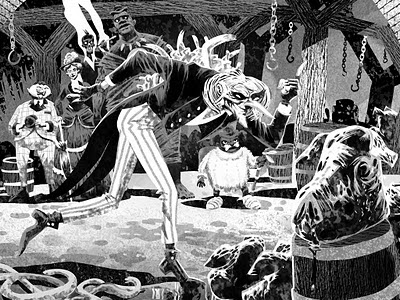 Meet the gang 'cause the boys are here - Stickleback: London's Burning
Stickleback © 2009 Rebellion Developments/2000AD
Stickleback created by Ian Edginton & Me
Well, what goes around comes around, and after nearly two years, here comes the third series of Stickleback. As long-term readers of this blog will know, I put up a blog post for each episode of Stickleback, listing references and in-jokes that Ian and I pop into the backgrounds.

For anyone joining us for the first time, it's worth checking out my posts on Alberto Breccia, whose collage work inspired much of the unique look of Stickleback. 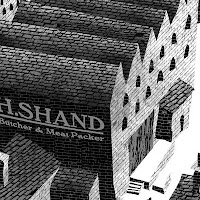 Harold Shand was the character played by Bobo Skins in John Mackenzie's epic 1982 gangster flick The Long Good Friday. In response to attacks on his business interests, Shand kidnaps a number of likely suspects and strings them up in an abattoir. 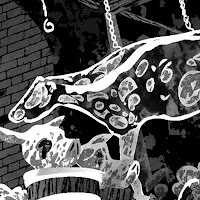 Page One: Damien Hirst Cow
The half-cow in the background of panel 4 is a tip of the hat to that most prominent of the Young British Artists, Damien Hirst, who is probably best known for his series of dead animals preserved in formaldehyde. As well as a cow, Hirst also created work using a sheep, and, most famously, a 14ft tiger shark. 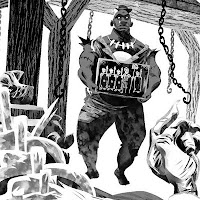 Stickleback's cheery "Front and centre with the Wide Duchesses!" refers to the magical world of British roof slate sizing. Different sizes of slate (still measured in inches!) are given different titles; Duchesses, Marchionesses, Viscountesses and Ladies, often available in "wide" and "small." Check out this list for the full range. 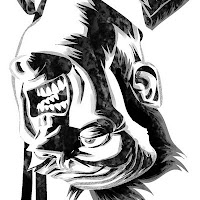 Page Four: "Grouty"
Doubtless an ancestor of "Genial" Harry Grout, who by 1975 was running H. M. Prison Slade in Dick Clement and Ian La Frenais' classic BBC sitcom Porridge.
Played in fine menacing style by actor Peter Vaughan, "Genial" Harry Grout remains one of the best-remembered characters in the series, despite appearing in only three episodes. 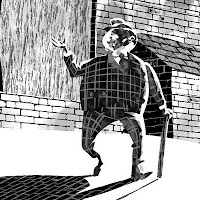 Page Six: Mister Tickle Lives!
In the original plot outline for the previous series (Stickleback: England's Glory), Mister Tickle was slated to die horribly at the hands of the false Buffalo Bill during the final battle in Hyde Park. He survived only because both Ian and I forgot about him entirely, and by the time he was due to peg out it was a bit late to drag him in out of left field. We settled for cutting Black Bob's arms off instead. 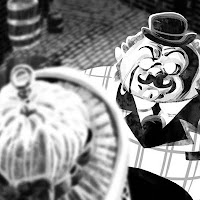 Page Seven: "A Tug and a Tuck"
Although Ian does own dictionaries of archaic slang, he tells me that many of the fruitier turns of phrase (including this one) come off the top of his head. 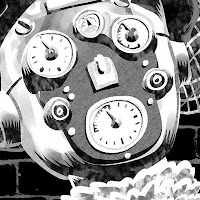 Page Eight: Robo-Doxy
Anyone remember the exploding Robo-Cow, created by the late Professor Philo Thynne, in the second-ever episode of Stickleback: Mother London? Any similarities between that explosive ambush and this one are, shall we say, far from coincidental... 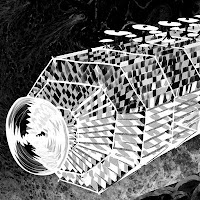 A slightly complicated one, this; our dirigible The Mistral is loosely based upon Robur's "rotorcraft" The Albatross from Jules Verne's 1886 novel Robur the Conqueror. That story follows much the same pattern as the better-known 20,000 Leagues Under The Sea, except that Robur is an aeronaut rather than a submariner. In the book, The Albatross is a heavier-than-air craft supported by multiple propellers (a sort of early helicopter) with two large propellers front and back for propulsion. Early illustrations show it looking like a clipper ship with propellers on its masts instead of sails.

In 1961, the story was filmed as Master of the World, starring Vincent Price. Here The Albatross looks more like a standard dirigible, but with banks of rotors on the top side (and it is still described as being heavier than air). And just to complicate matters, Master of the World was also the title of Verne's 1904 sequel to Robur the Conqueror, in which The Albatross does not appear at all.

A curious aside: Wikipedia also records the supposed 19th-Century phenomenon of "mystery airship" sightings, similar in tone to the various waves of UFO sightings from the 1950's onwards.

Our Mistral is a dirigible which uses additional rotors for manoeuvrability and to support the weight of the huge mirror panels which can be rotated to make the ship virtually invisible from a distance. The notion of invisibility via mirrors is a lovely poetic conceit, but in practice, covering a dirigible in mirrors would turn it from a Big Obvious Thing into a Big Shiny Obvious Thing - assuming it could fly at all with the additional weight.
The wonderfully erudite Jess Nevins informs me that the concept of rendering things invisible through mirrors goes right back to the early pulp magazines:

Electrical Experimenter was widely read among sf fans and writers during that era, but Dr. Hackensaw was hugely popular (43 stories spread over four years), so it’s a toss-up as to which created the trope."

My guess is that Ian and I picked up the trope third- or fourth-hand from comics or TV series made in the 1960's - though specific examples escape me.

Great to see Stickleback return and your own return too the blog look forward to your weekly disections of each episode.

'Appy Christmas Mr.Brooker! Another delightfully informative post sir. I was beginning to worry that you'd been abducted by little greek men. Fantastic opener for Stickleback, as always, a treat to see your work in the prog. Best wishes to you and yours and have a cool yule.

got to second the above.

Cheers, guys - as well as catching up on Stickleback, I've been unwell (I lost nearly a fortnight to the lurgey), but mostly the lack of posting's just my own natural crapness :-)

Thanx for all the reference and layout shots - really nice to see what goes into each panel.Reminds me of all the little "extras" Kevin O'Neill put into the League of Gentlemen.