(Sorry for the delay in posting these references - I've been caught up with finishing the last episode of Stickleback: London's Burning. Will try to catch up on the posts ASAP) 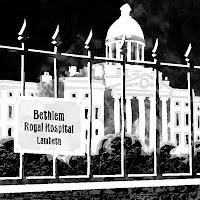 In Stickleback's world, the secret HQ of the British Secret Service. See the references for Stickleback: England's Glory Part 2 for a history of the Bethlem Royal Hospital. 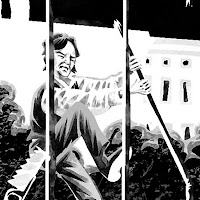 Page One: Herbert George Sewell
The time traveller created by Ian Edginton and myself for a series of Judge Dredd stories. In Stickleback: England's Glory we saw him being dragged into Bedlam; here he's cutting his way out, but a pair of wily warders have their eye on him. 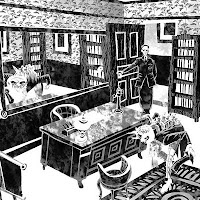 Page One: Ashenden's Office
As it appeared in Stickleback: England's Glory. The large mirror behind the desk is one way, and allows the head of the secret service to monitor events within. 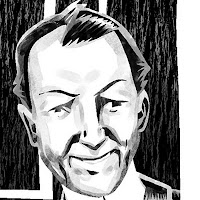 Page One: Mister Scudder
Successor to the unfortunate Ashenden, who was peeled alive by the false Buffalo Bill at the end of Stickleback: England's Glory. Scudder's appearance was inspired by the veteran British actor Sir John Mills. 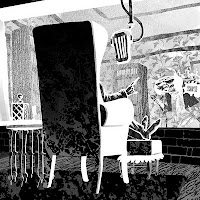 Page Three: The Man in the Chair
The image of the hidden villain, identity hidden by a high-backed chair, is one taken from the way the character Ernst Stavro Blofeld was introduced in the 1960's James Bond films. Our man lacks the signature white persian cat, though. 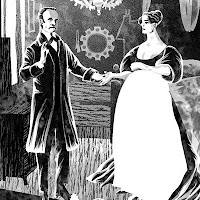 Page Four: The Arnolfini Portrait
The composition of this panel is borrowed for Jan Van Eyck's 1434 painting known as The Arnolfini Portrait (sometimes The Arnolfini Wedding). It's particularly striking since the "bride" appears to be heavily pregnant.
Our version features two of the earliest figures in computing, Charles Babbage and Ada Lovelace.
Charles Babbage (1791-1871) was a mathematician and mechanical engineer who came up with the idea of the programmable computer. He designed a wholly-mechanical calculating device, the Difference Engine, which was capable of returning results to 31 decimal places. Though it was never completed during his lifetime, a Difference Engine built in 1991 did indeed work successfully.
Augusta Ada King, Countess of Lovelace ("Ada Lovelace" 1815-1852) was the only legitimate child of Lord Byron, and a mathematician who took an interest in Babbage's Difference Engine. He notes on the subject include what is recognized as the first algorithm designed to be processed by a machine. Thus she is often regarded as the world's first computer programmer. 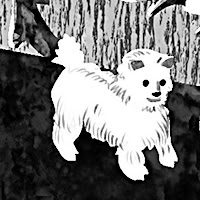 Page Four: The Arnolfini Dog
Drawn pretty much as it appears in the original painting. Given the near-photographic accuracy of the rest of the painting, this clumsily-drawn dog seems like a bit of an anomaly. Either Van Eyck was no good at dogs, or possibly the fluffy little bastard wouldn't keep still. 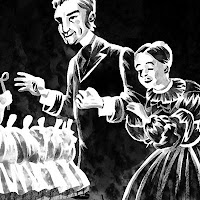 Page Four: Count Bernoulli
The name is a reference to Dutch-Swiss mathematician Daniel Bernoulli, who is best known for his work in fluid mechanics and his pioneering work on probability and statistics. Bernoulli's theorem (put simplistically as "moving air has less pressure") explains, among other things, how spray guns work and how aircraft wings generate lift.
The character of Count Bernoulli, as shown here, was inspired by actor Ferdy Mayne, who is probably best remembered for the role of Count von Krolock in Roman Polanski's 1967 film The Fearless Vampire Killers. 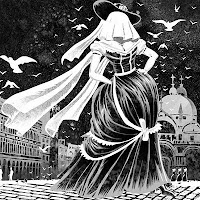 Venice
In the script, no location is specified for this portrait of the young Countess - but since she was meant to be in Italy, I thought where better than Venice, home town of that most romantic of Italian comic characters, Hugo Pratt's Corto Maltese? 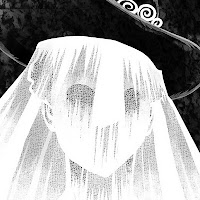 This particular way of drawing a veiled face (using blocks of shading to hint at the features beneath the veil without showing them) is borrowed from Marc Hempel's drawings of the Gorgon women from Sandman: The Kindly Ones - which I had the pleasure of inking back in 1994.
Posted by Unknown at 9:22 am

Thanks for putting up this fascinating material. I've just returned to 2000 AD after a LONG period away & have been thoroughly shocked to discover that I enjoy Stickleback as much as I do. I thought the days of my finding a new "favourite" comic strip were many years in the past. I'm impressed by your achievements & I'm looking forward to whatever it is that you do next. My best to you, sir.