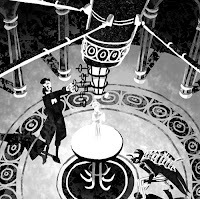 Based on a real pre-photographic projection device, in which an image of the outside world is projected into a darkened room through a tiny pinhole (“camera obscura” is Italian for “dark room,” and is where the English word “camera” comes from.) Later versions employed a rotating turret containing a lens and mirrors which projected a circular image down onto a flat viewing table, as with our design, which is loosely based on the camera obscura on the Royal Mile in Edinburgh, round the corner from the flat where I was living while drawing the first series of Stickleback in 2006.

The 3D projection aspect owes more to Star Wars than any real technology, though. It’s interesting that even retro-futuristic technology has to have this extra level to it now; I suspect ten years ago we might have limited the capabilities of such a devise precisely to show that we were in the past. I think of this as “super-duperness inflation.” 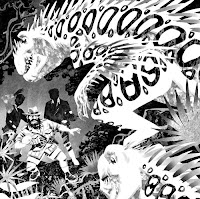 The original home of the Sorrys obviously draws inspiration from the dinosaur-filled plateau of Maple White Land from Sir Arthur Conan Doyle’s 1925 Professor Challenger novel The Lost World. Our Professor Challenger is based loosely on actor, explorer and national institution Brian Blessed, whose real life exploits were inspired by the character, and who played a parody of him, Sir Basil Champion, in BBC Radio 4 Extra’s The Scarifyers. 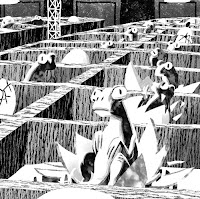 While obviously playing on modern anxieties about the factory farming of animals (chickens in particular), the batch breeding of a sentient but compliant workforce also has echoes of Aldous Huxley’s 1931 social parody, Brave New World. 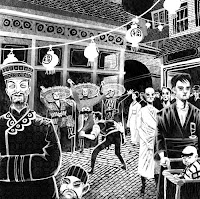 This panel was an absolute bitch to draw; there are as many references dumped in here as the next two episodes put together. Also, due to my limited talent at producing likenesses, there’d be no reason to recognize most of them without this handy-dandy guide. From left to right:

Li H’sen Chang and Mister Sin from the 1977 Tom Baker-era Dr. Who story The Talons of Weng Chiang (itself a play upon Sax Rohmer’s Fu Manchu stories).

The Three Storms versus a Victorian-ified version of Kurt Russell’s Jack Burton from John Landis’ Big Trouble in Little China (1986).

(Background) O-Ren Ishii and her bodyguards, the Crazy 88’s (their costumes a reference to Bruce Lee’s costume in the television series The Green Hornet), from Quentin Tarantino’s 2003 gore-fest Kill Bill.

(Midground) John Carradine twice, once as Kwai Chang Kaine from the 1972 television series Kung Fu, and once as Bill from Kill Bill.

(Foreground) Lone Wolf and Cub, from the Manga of the same name (Japanese: Kozure Ōkami) by Kazuo Koike. A total of seven live action Lone Wolf and Cub films were made in Japan during the 1970's, two of which were cut together to make the English-dubbed Shogun Assassin (1980). 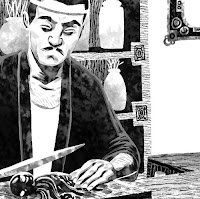 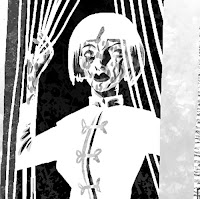 Miss Scarlet has always been woefully under-used (the penalty of a large ensemble cast is finding them all something to do) but with this new series Ian was determined to bring her to the fore and give her more to do. Her new, orientalised look gave us the chance to give her a more modern, “flapper”-style vibe, suggesting someone looking towards the 1920’s and 30’s rather than back to the Victorian Era. For myself, I kept in mind Shanghai Lil from Hugo Pratt’s wonderful Corto Maltese in Siberia when drawing her. 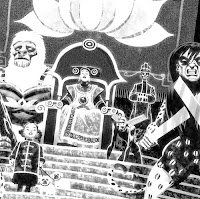 Page 5 Panel 2 - The Court of the White Lotus Empress

Introduced in the last episode of Stickleback: England’s Glory, the Empress is a female analogue for Sax Rohmer’s Fu Manchu. A detailed breakdown of the characters in the Lotus Empress’s court can be found here.
Posted by Unknown at 11:00 am

Wow! Once again some awesome references Mr. D'Israeli! The 'Oriental Tropes' panel was a treasure trove for eagle eyed readers. I must say i missed out O-Ren Ishii and her bodyguards, and the Three Storms and a Victorian-ified Kurt Russell gave me a right old chuckle! Great stuff!