So Whatever Did Happen To Scarlet Traces 2? 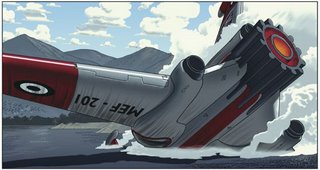 Getting a comic off the ground can be a stop-go business, and despite getting the go ahead for The Great Game in early 2004, various production hold-ups meant I didn't start drawing the first episode (with the exception of three test pages, see inset) until March 2005.
Since the previous Christmas we'd been hearing occasional murmurs that Jeff Wayne (who produced the 1970's War of the Worlds concept album, and who held the European rights to WOTW) was looking to produce a graphic novel to exploit interest in WOTW generated by the Spielberg film. He'd approached Dark Horse in December 2004 but they hadn't been able to come to terms; in April 2005 we heard he'd returned to negotiations, and with the film so close, a deal had been struck allowing us to do our own adaptation from the Wells novel, Because we could use my designs for the Martian tripods, the adaptation effectively became Scarlet Traces #0, giving us a trilogy to sit on the bookshelves. What's more, schools and libraries would be more likely to stock a WOTW adaptation, giving us a bigger market for our own books.
Dark Horse were willing to reschedule The Great Game for the following year. The drawback was that there wasn't time to get a 60-page graphic novel finished before the film came out, so in an odd mirroring of Scarlet Traces, three-page chunks of WOTW were posted on the Dark Horse website as I completed them (it's still up, see links). I designed the pages to be broken in half so they would fit on screen without scrolling. The artwork was finished at the end of November 2005 and WOTW the hardback graphic novel was released last month.
So, if you saw The Great Game solicited in Previews last year, that's where it went - but I'm back on the job now and thundering towards completion...
Bliss.
Posted by Unknown at 9:39 am