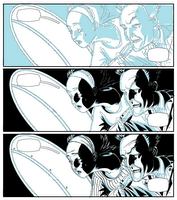 A big "Tu es le Grandpere maintenant!" to my old mate Paddy Lamb for putting me on to a new working method, though it took me long enough to start using it.
He probably won't even remember the occasion; one night perhaps eight years ago at his folks' place, showing me photocopies of Roy Crane's Buzz Sawyer newspaper strip that he'd brought back from the Kubert School, he pointed out that many of the old artists used to add the spot blacks before inking in the outlines. Now as a self-taught inker, this struck me as a bit mad; I'd always inked outlines first and kind of assumed you had to.
I had a try at it when I got home and found it terribly intimidating. In the end I gave up on the idea and pretty much forgot about it, especially as all my work at the time was colouring. Still, it must have been percolating in the back of my head, because a couple of weeks ago, when I was racking my brains for ways to speed up my work on The Great Game, the notion surfaced again.
What changed this time I'm not sure; the move to working on computer (meaning all the chunks of black are now editable) probably has a lot to do with it, and you never know, my skills may even have improved a bit in the last decade (chortle). Whatever the reason, I took to it like a duck to water; it's quicker because I'm not drawing a load of lines that I then black out, and the drawing somehow looks a little more elegant too.
So eight years on, I suppose I should say, "Enfin, tu es le Grandpere, Paddy!"
Bliss.

this is an interesting notion... although I still haven't go to grips with using the computer to create pages (it becomes tiresome on what would now be classified as 'an older machine') this is one of the first times a layered working method seems to have made proper sense to me.