A Blast Not Only From The Past, But The Very Depths Of Obscurity...

Does anybody out there remember Phoenix 5? It's something I remember from my childhood in the early 70's, viewed in crackle-o-vision because it was broadcast in the neighbouring Tyne Tees ITV region, which we could sometimes get if the wind was blowing in the right direction. It was a sort of ultra-cheap Australian Star Trek knock-off, set in the same sort of enlightened multi-cultural future as Jim Kirk and his lot, just one where there were different accents and a lot less money around. It was never networked in the UK, and as a result is so obscure here that until a year ago I'd never met anyone else who'd even heard of it; until I found traces of it on the Internet I wasn't sure that it had ever existed.
Half as a joke, I suggested to Ian that we include a little tribute to Phoenix 5 in Scarlet Traces: The Great Game, and to my delight, he not only agreed, but found this website that gives details about the programme, also explaining how it was the third of a trilogy of TV series, the first two being Interpretaris and Vega 4. All were not only set in the same shared universe, but seem to have recycled the same props and models, judging from the screenshots on the site. It also means, to be fair, that Phoenix 5 isn't quite such a steal from Star Trek as I always thought, concept-wise, since Interpretaris pre-dates its American cousin by nearly a year. 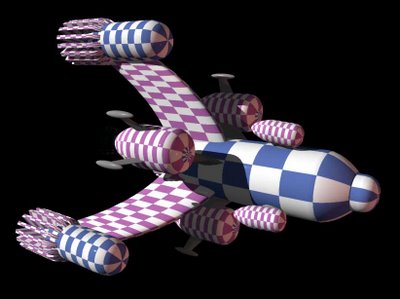 Above is my Phoenix 5 tribute model. The original is more-or-less aircraft like - two wings with rockets on the end, tail with motor, and an overall impression of too many fins and nacelles for its own good - so I did the same trick as I did with the Zero X and turned it into an upright design with trilateral symmetry. Since none of these TV series have ever been available in any format anywhere, we reckon it's safe to keep the names this time.
Unfortunately (or possibly fortunately for the sake of the end product) I couldn't fit in a tribute to my other great obscure love, the black & white Bavarian Star Trek precursor, Raumpatrouille Orion (Space Patrol Orion). Made with what were pretty good SFX for 1968 TV, it features strange choreography, cities full of fish, and an amazing sculptural bridge set notable for a combination of clever technology (the bridge viewing screen is built into a frosted-glass table-top with a cine-projector underneath, so the characters can interreact with the images on the screen while the camera pans round) and what seem now like amusingly Blue Peter-like touches; plastic beakers as light fittings and curvy 60's steam irons as control switches. The acting and chemistry between the cast seem pretty good for that sort of thing; my limited German isn't up to assessing the quality of the scripts, but it looks as if it could give Patrick Troughton Dr.Who a run for its money (I'd be interested in any German speakers' opinions on this). It's worth watching episode one for the dancing alone.
Best of all is the theme tune, by Peter Thomas and his Sound Orchester (Sic). It's a true classic in the Sixties Groovy Style (think Man From U.N.C.L.E. or Man In A Suitcase*) and what's more you can get it on iTunes; the track is called Space-Patrol (Raumpatrouille) from Raumpatrouille (The Complete Music).
Much of the rest of the album sounds like someone having a fit up against the Blackpool Tower Ballroom Organ (though you may go for it if you're into Frank Zappa), but the following tracks are recommended as amusing oddities:

Raumpatrouille Orion the TV series is available as a DVD box set (amazon.de is a good place to start) but as German domestic product there are no English soundtrack or subtitle options. It's still nearly worth recommending it to non-German speakers just for the dancing in episode one, but not quite.

*recycled, in his one public act of good taste, by Chris Evans as the theme for T.F.I. Friday.
Posted by Unknown at 4:38 pm

Raumpatrouille is a) very very good, especially on scripts and plotting, nicely masking a very nasty militaristic dystopia behind banter and coolness and b) it also predates Star Trek. No knock-off there.

a) thanks, th, this is good to hear.
b) apologies, have amended the post from "knock-off" to "precursor."