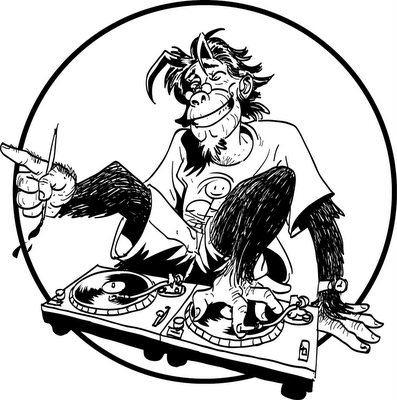 Publicity image for CAPTION 06 - the CAPTION logo on the ape's T-shirt
is by Damian Cugley
CAPTION 2006 - Oxford's annual alternative comic convention - will be taking place at the East Oxford Community Centre this weekend (5–6 August 2006). CAPTION is possibly now the UK's longest running comic convention - it's taken place every year since 1992, and this is the first time for the new third-generation CAPTION committee. The convention has a different theme each year; this time it's "CAPTION Remix."
If you've ever been to a convention like Bristol or the old UKCACs, CAPTION is a revelation - a fun, relaxed time that's about meeting people, sharing ideas and enthusiasms, making friends, jamming and sitting round having a drink and a laugh. It's a broad church that takes in fans of everyone from Kochalka to Kirby.
Unfortunately, I'll have to miss this one - I'm acting as best man for an old friend that weekend - but I'm putting a couple of items in for the auction. I'll also have a sort of telepresence in the form of the short film Reptile Day, a live-action bluescreen film for which I drew backgrounds. The Phantom Menace it's not, but it is better written ;-P

More information on CAPTION at http://caption.org/.
Posted by Unknown at 2:58 pm