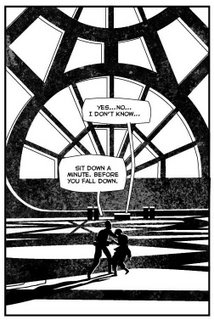 Woke up yesterday morning with vague nausea that, over the course of the morning, developed into general slight flueyness and a heavy stomach. Nothing crippling, but that nagging sense of "not-rightness" that is more of a harbinger of real illness than any specific symptom.
When you're self employed, life is dominated by the simple equation "work equals food" - or paying the gas/leccy/phone/ broadband bill/mortgage payment, you get the picture. One thing I have learned over the years though, is to know when to give in; a day lost to recovery now can prevent extra days of illness in the future. It was a lesson hard-learned; back in 1994, when I was inking Marc Hempel on Sandman: The Kindly Ones, I tried to keep going through what seemed like a persistent cold, only to end up collapsing so badly that I was off work for more than six weeks.
So I spent as much of yesterday as I possibly could sleeping (except for when my belovèd, the lovely Dr.F, succeeded in smashing her own head in on a concrete clothes-post, and I had to administer cold compresses and then nip down to the chemist's for some Hirudoid™ cream, the things we do for love) which seems to have done some good - I'm feeling well enough today to alternate bouts of work with bouts of dozing, though it's so hot and humid here I honestly can't tell if I'm feverish or not.

So that's what cooties are. I always wondered.

I'd be interested in an American's opinion on this - cooties always sound to me like some sort of parasitic thing - fleas or nits or such, whereas lurgey's a contagious disease trasmittable by touch, but culturally they seem to occupy the same niche (see practically any episode of Calvin & Hobbes with Susie in it).

There is such a thing as a cootie shot, so there's got to be bacteria or virii involved. Epidemiology still has much to learn about these dread diseases.

This Yank is familiar enough with lurgey, thanks to wide exposure to The Goon Show during my teens. Didn't Sir Harry succumb to lurgey?

That "Sit down before you fall down" line is cribbed from The Firesign Theatre, yesno?

Did the head injury come before hanging the washing out, and if so, did you do the decent thing and finish the job?

Thanks, Bolt - in fact, she was out checking the progress of the electrician who was drilling holes on our back wall to affix a security light, but if she had been hanging out washing, I would have done the decent thing (had I noticed ;-).

I managed to not get ill (not even a sniffle) for four years once.

On the rare occasion that I am ill, I eat a lot of chicken soup (a tip picked up from a Batman cartoon where he fights mister freeze and beats him with Chicken soup... hey, I don't need no doctors, I've got Batman). And then it's anything that makes you sweat that sucker out. Hot curries hot baths, steaming hot bowls to hang your head over. Anything.

Ahhh... Jewish penicillin :-) I hadn't thought of it, but the weather's been so hot and humid that I've been sweating cobbs without any artificial aids. That could well have helped.

I once had a bad flu-ey cold while visiting friends in Aberdeen and my mate Mike gave me a genuine hot toddy (made with hot water, whisky and a mysterious bag of herbs prepared by his mother). I took it and retired to bed, aching, sore of throat and head, only to wake about four in the morning, soaked in sweat, with Mike's enormous white tomcat perched on me, absorbing the heat I was radiating. I tried to wriggle out from under, but he was a big b*st*rd, and in my enfeebled state I was pinned. After about half an hour I passed out.
The next morning I woke to find myself hale and hearty once more, albeit reeking of dried sweat. There was no sign of the cat, but Mike assured me I hadn't been dreaming; he did the same every time Mike was unwell.
So, same principle as the chicken soup I guess, but to this day I'm not sure if it was the toddy or the lard-*rsed, long-haired tomcat that had the most effect in sweating out the bug.

Cats can sometimes bring 'gifts' when you're not well. Not sure if that's true or a myth, but I only wish mine would bring money or book vouchers instead of dead mice and dead birds.