The Bells Are Ringing... Fig A: I (left) have better legs than Dave (right).
(Photograph by my belovèd, the panchromatic Dr. F.)

If you were a regular part of the scene at the UKCAC and Bristol comic conventions in the mid-to-late 1990's, you may well remember the human dynamo that is my good friend David Moyes. The networker supreme, Dave once managed the astonishing feat of wangling me a regular colouring job at 2000AD, although he wasn't himself working in the comics industry at the time!
Even more astonishing was the bravery of his decision to have me as his best man (my knack for both forgetting and losing things is legendary, I could tell you some tales if I hadn't mislaid the bit of paper I had them written down on). When he rang me to ask me, I could almost hear the gleam in his eye when he said "oh, and by the way, you'll have to wear... a kilt!" Not that I was fazed... I've shared a hotel room with the man, and I know which of us has the better legs (See fig A, above).
Prior to the big day, I'd only worn a kilt for ten minutes or so during the fitting, but even so found it almost disturbingly liberating; after some agonizing over whether to "go commando" or not, I eventually settled on the halfway-house of wearing an old pair of shorts with big holes in them. Still, the first stiff breeze in the right direction proved a revelation; I finally understand what all those little hairs on my legs are for. There’s a considerable danger that by this time next year I'll be going by the name "Margaret" at weekends.
Worse by far than the kilt (and even the ordeal of having to hold on to the rings for a whole 45 minutes without losing them) was having to make the best man's speech, though I think I earned a degree of audience sympathy by realising that everybody was starving, and keeping my bit (the last speech before the meal) as short as possible. Myself and the boogie-licious Dr. F dance the Gay Gordons
(photograph by Laurence Campbell).

Still, the food was excellent, and later there was dancing (The Gay Gordons plus the odd thing you could Rhumba or Salsa to, I'm less fond of Random Bopping, though I did a bit). Fellow 2000AD stalwart Laurence Campbell and his wife Natalie were there, so it was an excellent opportunity to catch up; I like Laurence muchly, but, possibly because he's very modest and self-effacing, we don't tend to get as much time as I'd like in the social melee of the typical comic convention. It turns out he's working on Something Big that he wasn't prepared to talk about, so keep your eyes peeled; to date Laurence hasn't really been given a vehicle that brings out the best in him, but once he does the sky will be limit.
I can also reveal that, despite his many protests that he has no sense of rhythm, Laurence turned out to be quite a mean dancer. I shall evermore think of him as "Snakehips..." Laurence "Snakehips" Campbell dances so hard his legs enter another dimension.
(I'm gonna get such a kicking the next time he sees me ;-)
So this morning Dr. F and I packed up and headed home, bleary-eyed and muzzy-headed (I really should not have had that half-glass of wine with the meal yesterday). I did manage to get a bit of colouring done on the train home, though. 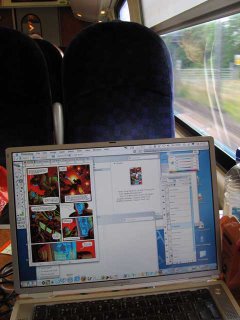 Proof for my long-suffering editor, Dave de Dark Horse,
that I didn't fritter away the whole of the last two days...
Posted by Unknown at 10:34 pm

Snakes on a plane? - Bah!
Colouring on a train!

Yeah... sheer, pulse-pounding, elbow-jogging action as you've never seen it before...
I kept the JPEG of this small so it the page on screen wouldn't act as a spoiler, but for anyone getting issue four, it's the page with all the really wiggly lines on it...

So MoyesMan got himself hitched. I shall have to email him some rude congratulations.