I Have Often Walked Down This Street Before... 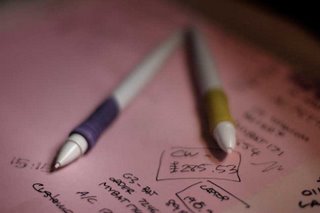 My Wacom stylae cool in the morning air...
That's it. Done.

There'll be the odd correction and tweak still to do I've no doubt, but nevertheless, as of 8.50 this morning, Scarlet Traces: The Great Game is finished.

I wondered how I'd feel on reaching this point; it's two years since I first started The Great Game, and given that War Of The Worlds was written by the same writer and drawn in the same style and format for the same editorial team, I've effectively been working on the same thing for all that time.It's been a real rollercoaster ride too; Ian, Dave de Dark Horse and I planned it so that we could turn out the book on a long schedule, giving me plenty of time to do a good job and even the odd other project on the side. As things turned out, various hold-ups and the last-minute decision to do War Of The Worlds have meant a two-year sprint to keep on top of deadlines in the face of house moves, computer collapses, exploding central heating systems and a wedding. Add to that the fact that the dollar rate has collapsed since we signed our contracts in 2004 and it's not been an easy ride at all. It should really feel like the end of an era.

Except, as the amnesiac said for the umpteenth time, it's deja vu all over again. If The Great Game has been a rollercoaster ride, the original Scarlet Traces was like tobogganing down the Matterhorn on a tin tray while being strafed by Stukas armed with bullets full of poo.
It took Ian eight years from coming up with the concept of Scarlet Traces, to placing it with web comics publisher Cool Beans Productions. Eighteen months later, when Cool Beans folded, we had a comic which was only 75% complete and which was still owned by the defunct publisher - a situation of nightmare complexity which Ian managed to resolve using a combination of fast talking, inspired deal-making and (I presume) black magic. Having retrieved the property, Ian then managed to license our previously-unpublished comic to Rebellion's Judge Dredd Megazine as a reprint - thus giving us the funds to complete the story while retaining ownership.
For me, it meant re-formatting a load of (mostly) landscape-format web comic pages into portrait-format print comic pages, re-drawing a few existing panels and completing sixteen new pages in the space of about six weeks. By the end of October 2002, the thing was in the can, a mere ten years after Ian first discussed the idea with me over the phone.

But then, in early 2003, came the Dark Horse reprint, in a slightly different format, with extra pages, so I ended up re-configuring about eight pages of the conclusion, adding new panels, extending and re-drawing others, doing a cover. By April 2003, the Scarlet Traces graphic novel was in the can.

I mean, it's not as if we could do a sequel or anything...

So here we are again; Scarlet Traces is finished once more. Given that we now have a complete story arc from the Martian invasion in War Of The Worlds through the British invasion of Mars in Scarlet Traces to the conclusion of that war in The Great Game, I don't see that there's anything more to be added. Ian says he has one more short story about Robert Autumn in him, but even if we get to do it, that'll only be a few pages.

(Thanks to everyone for hanging on during my deadline-beating absence. Normal service will now be resumed.)
Posted by Unknown at 9:51 am

Having read and enjoyed Scarlet Traces, War of the Worlds and the first two issues of The Great Game, I'm slightly sad that you're done (bar one last short story). But I'm also relieved that you guys are not gonna go all George Lucas on your trilogy...

But I've got six words for you -- "Scarlet Traces: The Musical Holiday Adventure."

But did the Martians win? In which case are we all fish food? Is there a McHuman on every street - as well as an arachnid hansom cab?

Only time will tell.

Unknown said...
This comment has been removed by a blog administrator.
4:58 pm

I have often walked
Down this street before
Till a heat ray left me burnt and powdered
On the floor...
All at once am I
Desiccate and fried
Just a stain on the street where you live

I have been waiting to see the Great Game since you picked up a few illustrations and thrust them at me at Dreddcon last year while I got you and Ian to sign Scarlet Traces.

Congratulations on getting it done.

Now all I have to do is get to my comic shop and buy the bleedin' thing!

Looking forward to picking up The Great Game at Page45 this weekend. Congatulations on finishing.... what's next then?

Matt, INJ, Rob, Anonymous - thanks for the kind comments. We do get a resolution to the martian war by the end of The Great Game, but perhaps not the one you would expect...

Paulhd, the next thing is for 2000AD, it's a sort of fantasy Victorian crime thriller called Stickleback. It's written by Ian and it'll be starting in the big Christmas edition of 2000AD .