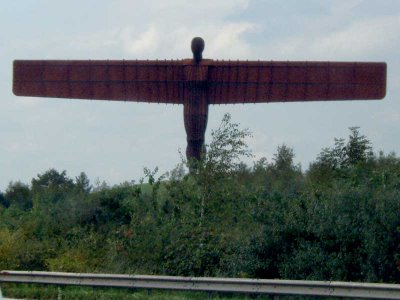 The Angel Of The North, glimpsed in passing outside Newcastle.
Yesterday was moving day.

My belovèd, the peripatetic Dr.F, has research leave from her university job, so we've headed up to Edinburgh for a few months while she (hopefully) gets the bones of a book written.
We spent Dr F's last leave in Vienna, which involved carting three suitcases and a couple of rucksacks halfway across Europe on a sleeper train; this time, the ever-wonderful Jim (the same Jim who fixed my Wacom Tablet) agreed to ferry a load of our stuff up to Scotland on his trailer.

He had no idea what he was letting himself in for.

We'd thought using the trailer would allow us to shift the regulation three suitcases "plus some other stuff" - but "other stuff" growed like topsy until it we'd packed so much stuff that the sides of the trailer were bowing out and rubbing against the tyres, threatening to cause a blowout; some nifty temporary repair work by Jim sorted that out, but the load had to be re-roped twice on the way up, nonetheless. 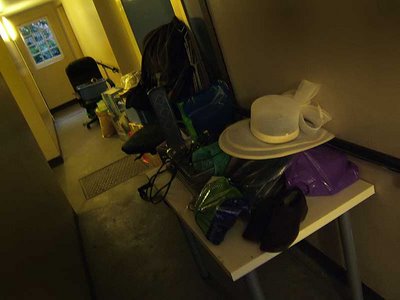 Our worldly goods languish in the non-too-secure entrance hall; terrifyingly, by this point we'd already shifted nearly half of them.

What hadn't occurred to us was, it's one thing getting three-quarters of a tonne of worldly goods from Nottingham to Edinburgh, it's yet another getting them from the trailer to a third-floor flat when the building has no lifts and the only recourse is The Stairs of Doom - a narrow, stone-built spiral staircase of the kind I usually associate with castles, so tightly wound that I can only fit my toes on the inner part of each step, and calculated to set off my terror of falling down stairs. Normally I get over this my firmly gripping the stair-rail and also the centre column as I go up, but many of the loads were so heavy and bulky they required both hands; the only thing for it was to take a deep breath and charge up the stairs on tiptoe, all the while feeling as if I was about to pitch over backwards to my doom. Luckily it only took fifteen or so trips for my adrenaline to run out.

Still, everything's in place now, the flat's gorgeous (small, well-appointed and slap-bang in the city centre) and the sun is shining. There's still a fair amount of sorting to do, but my working set-up has been reassembled, so I can finally get back to doing some drawing. After the prolonged heavy labour of packing and moving, actual work will feel like a holiday...
Posted by Unknown at 7:05 pm

Welcome to Scotland :) Enjoying the rain or did you bring it with you?

No, it was sunny up until we arrived in Edinburgh... and pretty nice yesterday when we were exploring. But this is more like it really, eh? :-)