Interpretation In A Squeeze 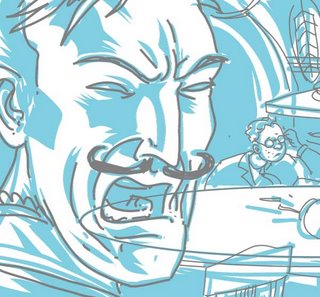 "Blast it to damnation! Some bugger's stolen the pupils of me eyes!"
Deadlines on part one of Stickleback are biting a bit, due to the time lost because of the move... I'm pencilling the last batch of pages from the first episode (a ten-pager, to go in Prog 2007). Having to draw the hero, Valentine Bey, for the first time in earnest; it's funny, you can do all the character sketches you like, but it's only when you draw a character in action that you really start to get a feel for them. At the moment, though, it's mostly about drawing him so he doesn't look like either Robert Autumn from Scarlet Traces, or Devlin Waugh...
Posted by Unknown at 3:59 pm