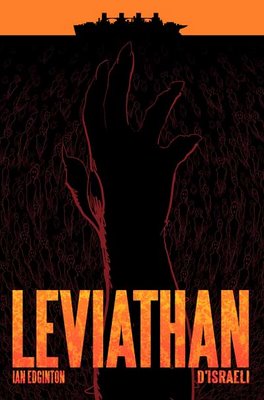 Leviathan Copyright © 2006 Rebellion/2000AD
Created by Ian Edginton & Me
This image is my rough design; actual title text and layout may differ.
Ian's had copies of the Leviathan collection at last - Titan Books have also apparently said it's available, so there should be copies at the Asylum signing on December 2nd (this Saturday!)

Rebellion have really gone to town on the printing, with an embossed cover - from what I can gather, they were keen to match the lovely job Dark Horse did on our books.

We've had enquiries from American readers about getting hold of copies; Ian and I usually try to purchase stock of our collections to sell on, and Leviathan will be no exception; watch this space for details. Ian Edginton: this man is known to be at large with copies of the Leviathan GN.
If you see him, do approach, as he's a lovely chap.

Finally Ian (but not I) will be at the Birmingham International Comics Show on 9th & 10th December (a week on Saturday). He should have copies of Leviathan to sign, and we're doing our usual deal of including a special signed bookplate with any book you buy from us.
Posted by Unknown at 12:50 pm

Very much looking forward to this.

It's in the Wild now. Saw copies in the local shop (MegaCity) and it looks gorgeous :)

Love the photo reference of you for the demon.
Instant classic.

Thanks for the kind words; I finally got to see a copy of the book on Friday, and I'm really pleased (and relieved) at how well it came out.

Mr. D'Israeli, I'm enamored with your work. I loved the War of the Worlds saga: All 3 books. When is Leviathan going to be available in the States?