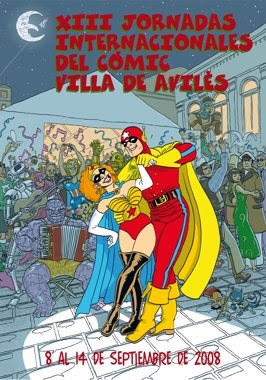 My poster for XIII Jornadas de Cómic de Avilés, northern Spain.
To see a much bigger version, check out the image at the end of the post.
Late as usual with the self-promotion, but I'll be going to the Jornadas de Cómic in Avilés this weekend. The event runs the whole week, but deadlines on Torchwood meant I could only do the Saturday and Sunday.

The Avilés guys kindly asked me to do the poster for this year's event; it's another one of my "mix and match" designs similar to my Bristol Expo Poster from 2007. This idea, borrowed from Brendan McCarthy, helps avoid copyright issues by taking classic superhero characters and mixing up their costume designs and colours. Aside from rights isues, it's hopefully fun to pick through the figures trying to work out what bits come from which characters.

There are several European characters in there that I did more-or-less straight, partly because European publishers tend to be a bit more relaxed about this stuff, and partly because Alack Sinner becomes unrecognizable if you paint him purple :-) 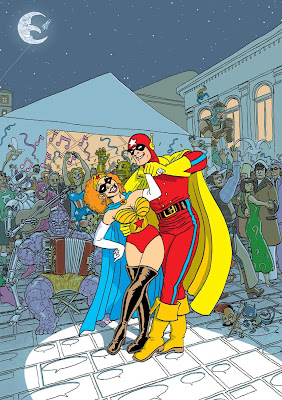 Click on this image to see a much larger version
Posted by Unknown at 6:20 am

Love the speech balloons on the flagstones!