Stickleback: 'Twas The Fight Before Christmas

From Twas The Fight Before Christmas, a Stickleback story by the Ians Edginton & Culbard
Stickleback © 2008 Rebellion Developments/2000AD
Stickleback was created by Ian Edginton & Me.
If 2000AD Prog 2009 plopped onto your doormat this morning, you'll notice a one-off Stickleback strip with art by my good mate Ian Culbard. Ian's an animator, illustrator and comic artist I met through his comments on this blog a couple of years ago. We're fellow contributors to the online comics consequences game Who Killed Round Robin?. Ian has collaborated with Ian Edginton on an adaptation of Oscar Wilde's The Picture Of Dorian Gray for Eye Classics, and they've now moved on to adapting the whole of Sherlock Holmes together.

It's funny how Ian got the Stickleback job; Ian Edginton rang me to suggest trying to get a Christmas story into Prog 2009 (Stickleback has had a presence in the end-of-year prog ever since it started in 2006). We both knew I was busy on another project for 2000AD (more of which anon), and while I might just have been able to squeeze this job in, I found myself thinking, "this story would suit Ian Culbard a treat, I wonder if Ian would be offended at me suggesting him for the job?" only to have Ian say to me "I know you're busy, would you be offended I suggested Ian Culbard for the job?"

So that was that. 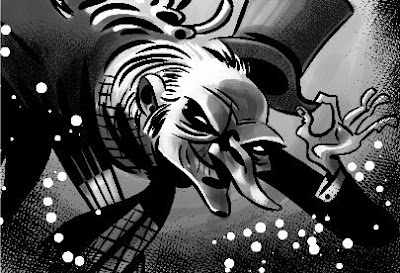 From Twas The Fight Before Christmas, a Stickleback story by the Ians Edginton & Culbard
Stickleback © 2008 Rebellion Developments/2000AD
Stickleback was created by Ian Edginton & Me.
I'm thrilled at the way the strip has turned out; it's the first time I can think of that someone else has drawn a character of mine for a whole strip like this*. Being an animator, Ian's handled the characterization beautifully, capturing Stickleback's body language perfectly and giving us a fantastic two-fisted Santa Claus on top. He's even slipped a fishpaste reference in there somewhere (I won't spoil your fun by telling where). You can read Ian's own account of drawing the strip here.

For more stuff by and about Ian Culbard, check out his blog, Strange Planet Stories.

As for me, I'll be back at the reins for a new series of Stickleback in 2009. I'll be starting work on it in March, once my current project is completed. And what am I working on right now? Here's a clue (picture, left.)

*Cliff Robertson is the only other artist to draw Stickleback, but as a single image on a cover rather than in a strip.

In 1992 there was a Lazarus Churchyard jam strip but no contributor did more than a single splash-page; in 1990 Shane Oakley drew some of the Deadline strip Fatal Charm, but we'd co-created and designed that, so it was "ours" not "mine." In 1995(?) Mark Buckingham drew the Marvel 2099 superhero Metalscream, created by Warren Ellis and myself, but then only for a couple of panels, and only to kill him off.
Posted by Unknown at 10:29 am

Sadly I won't be getting a copy of Prog 2009 until it hit the shelves of WHS later in the week. A bit disappointed to learn you're not drawing Stickleback, but I'm sure Ian will do a nice job.
Are you producing the new Stickleback series in the same style as before? It all ways looked quite tricky and time consuming to me. Hence I wondered if you were planning to change it.

Hmmm. I was a bit iffy when i read you weren't doing the art for this, but those panels look fantastic. I browsed Ian's blog too and ordered Oscar Wilde as i was so impressed with his stuff. Look forward to seeing you back on Stickleback tho for the next one.

Hi Matt. I love Dirty Frank - great character! Can't wait to see what you do with him.

Reuben - I'll definitely be doing the new series in the same style as before - surprisingly, it's actually quicker than drawing outlines round everything, but the thought process behind it is quite taxing so I usually need to do something in a more conventional style to wind down between series!

Pimpernel - glad to hear I've made another convert for the Culbard cause!

David - keep an eye open, I'll be posting more stuff about Lowlife once we get closer to the publication date.

Looking forward to seeing this. I can see this is Ian's work, but it does feel like Stickleback.

As regards the Breccia-esque style for Stickleback, I guess you must have a library of textures by now and fairly good idea as to how it's going to come out. All the same working with textures and this kind of collage can definitely require some forethought.

I'm waiting for the Stickleback animated series next, now that would be fun. It's got to be one of the best characters I've seen in years, the fact that he's so mysterious is great.

Just bought the 2k Xmas special. The Stickleback strip is a real stand out - best thing in there. Knowing Ian he probably did it in an afternoon!

Once again, Matt, thank you for your kind and generous words, and for plugging Strange Planet. Enormously appreciated. Thank you also for giving me the opportunity to draw such an excellent character. Sticky's such a strong design. I had a huge amount of fun drawing the strip.