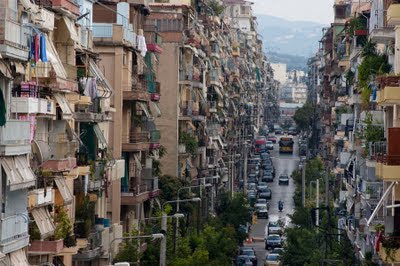 Matt the Barbarian, that's me.

Now, I know that probably paints a picture of me in horned helmet and loincloth, axe in hand, chain-mail-bikini clad vixen by my side. Fortunately, (or possibly unfortunately if you have very strange tastes) I'm merely a barbarian in the original sense of the word; one who does not speak Greek (literally, one who goes "blah-blah"). 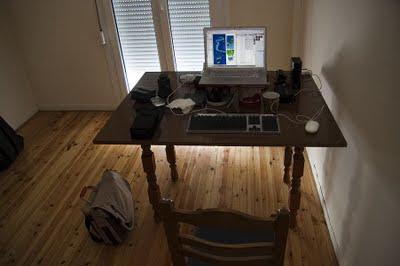 The reason this arises is that I'm writing from our new apartment in Thessaloniki, in the north of Greece, where my belovèd, the polylinguistic Dr.F and I will be living until next July. Yes, we're off on another one of our jaunts (long-term readers of this blog will remember our stint in Edinburgh in 2006-7). We have high-ceilinged rooms with shuttered French windows that make the place look as if it was lit by Ridley Scott. We have oddly random light switches and the hot and cold taps in the kitchen are reversed. We have a container full of possessions in transit, so we're sort of camping out right now, but there is a bougatsa shop by the entrance to our building, a tiny gecko under the fridge and feral kittens living six stories below the rear balcony, so we don't care. We are in Greece. 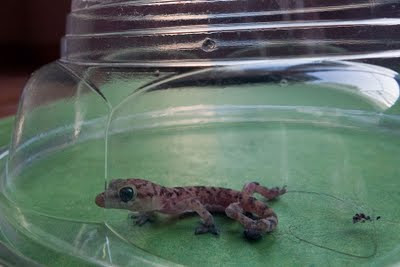 The tiny gecko from under the fridge 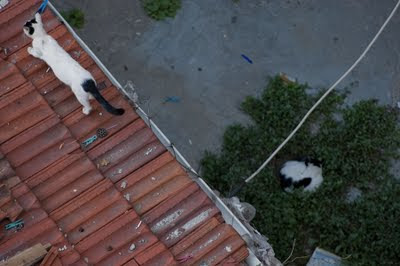 Feral cats in the back yard

This is why I've been off the radar for a bit; we've had more than a week of Packing Hell (plus two days of travel during which we got about four hours sleep). I'll be doing my best to catch up soon, with emails, blog and yes, work Oh Mighty Tharg, but for the moment I thought I'd just check in from my sun-drenched eyrie and well... crow a bit.

Our first Greek coffee and the terrible nose-staining consequences thereof

Of course, I'm not a complete barbarian, since I've been taking classes to pound a little Greek into my poor 43-year-old brain (if you live in or around Nottingham and need to learn Greek, I thoroughly recommend studying with Larri Sideris), but at the moment my International Comedy Foreigner Skills are doing much of the work (unaided, I've succeeded in ordering food; buying bread, mobile phone top-up cards and a kettle; and persuading a fellow resident of our block that I'm not German!)

And anyway, Dr.F reminds me that in modern Greek it's "varvarous." So there you go, not a barbarian, just barbarous.

I'm off for some bougatsa. See you in the funny pages.

Lucky for some! It looks nice. Enjoy Greece Matt :-)

Lovely. That first shot is awesome, super jealous. I'm sure as always you'll have a great time abroad. Keep us all updated and get your photos onto Flickr soon. All the best.

And yet again my cunning plan to bump into you at random and buy you a pint for the ever-growing body of your work that I've enjoyed encounters another setback.

Looks lovely. Hope you have a fantastic time over there.

Hey Matt, The flat looks great... have a great time there, and keep us posted!! Cheers, Steve

so, you're now a cos-play nazi living in a shanty town with nice lighting and rabid cats.
enjoy!

Hi Matt, have you heard of this mob doing a Dredd fan film? Some really nice design work and costumes.

Enjoy your time in Greece, Mate :)

i've moved back to athens since september, we should catch up sometime :)

Only been to Greece once, my impressions of Athens were very positive. I sat in Cafes and wrote quite a bit, so the Muses are still there to some extent.