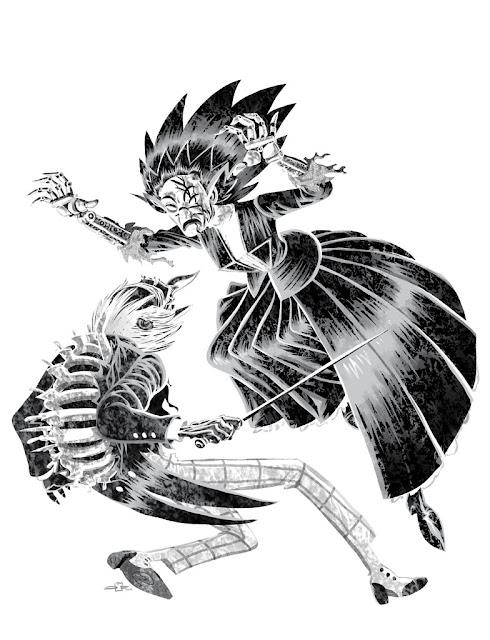 The cover was drawn directly into a computer using a Wacom Intuos 3 A5 graphics tablet, and three different applications; Adobe Illustrator for the initial drawing, Adobe Photoshop for the textures, and Corel Painter for the painted-looking finish. 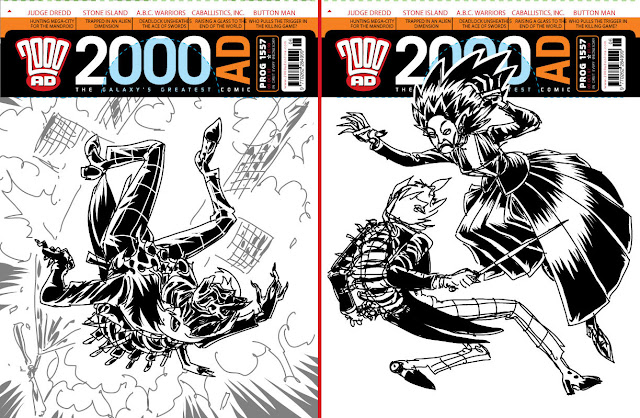 1a) Roughs
The first step is to generate a rough drawing of the cover concept for approval by Tharg-in-Residence Matt Smith. The idea is to generate a drawing that's clear, but without putting in too much work, as it might well be rejected.
As per usual, I did some very rough doodles in my sketchbook, then drew the roughs on the computer using a Wacom tablet and Adobe Illustrator. 2000AD issue cover artists with a special template file that shows how much space to leave for the title block (though note a small blue semicircle where the drawing can overlap the titles). I've placed this PDF into an Illustrator template, so when I do the roughs I know I'm working to exactly the correct proportions.
Often, Matt Smith will supply the cover concept for 2000AD, but this time I was free to pick a scene from the final episode. I came up with two ideas - one a wounded Stickleback falling through the air with The Mistral exploding above him, the other a duel between Stickleback and Countess Bernoulli. Matt picked the duelling scene, so off we went. 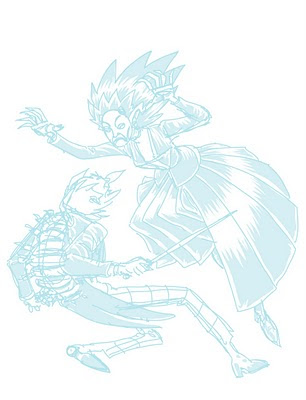 1b) Rough Pencils
This is exactly the same drawing as the previous one, just coloured light blue to act as rough pencils. The light blue dates from when I worked on paper, and would use a light blue pencil (which is not picked up by the reproduction process and so doesn't need to be erased) to rough out the drawing before pencilling with an ordinary graphite pencil. Nowadays, I do my drawing on different layers in Adobe Illustrator, so in fact any pale colour would do. 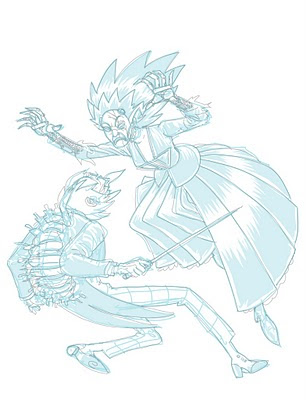 1c) Pencils
On a new layer, I do a more refined drawing in grey using the Pencil Tool set to stroke only, making sure that details are worked out and that proportions are correct. I don't bother with shading as that's established on the rough pencils. 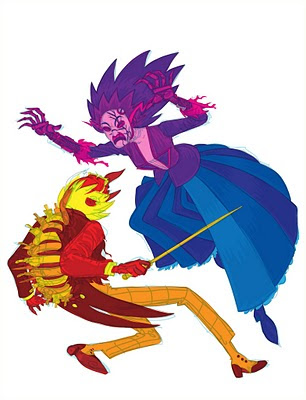 1d) Blocking Out
The later stages of the process will take place in Photoshop and depend on working inside selections - masked-off areas of the drawing - so to make that easier I break the whole drawing down into chunks of colour while still working in Illustrator. It doesn't matter which colours I use as long as they separate adjoining or overlapping areas one from another. I make the pencils layer transparent (select all, opacity to Multiply) and then use it as a guide to make the blocks on several layers underneath, using the Pencil Tool set to fill only. 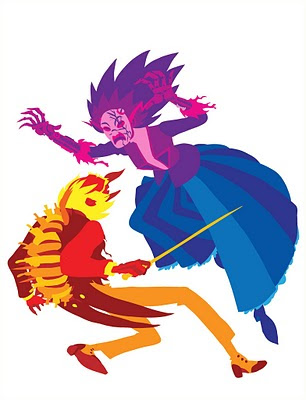 This is the blocked-out drawing with the pencils layer hidden. Once I've reached this stage I want to take the drawing out of Illustrator and into Photoshop, so I use File: Export and export as a 400dpi RGB Photoshop document with layers intact but WITHOUT Anti-Aliasing. I export the pencils and rough pencils layers as well as the colour blocks.
2) In Adobe Photoshop 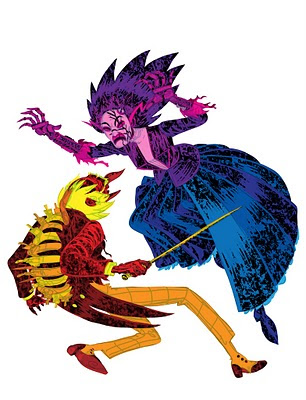 2a) Texturing
In this stage, I open the file in Adobe Photoshop and work on it using three main tools; the Lasso Tool (with Anti-Alias unchecked), the Magic Wand Tool and the Paint Bucket Tool. I use the Lasso and Magic Wand to select areas, then I apply textures using the Paint Bucket Tool, which is loaded with a set of my own home-made textures (culled from digital photographs of things like crumbly stone walls, concrete and tree bark). The texture layer is set to Multiply so that the whites are transparent.
I use the Rough Pencils layer as a guide to drawing shading; the textures go on their own layer. The quick way to do this is to trace the shadows with the Lasso Tool on the textures layer using the Rough Pencils as a guide, then hide the Rough Pencils layer and fill using the Paint Bucket Tool set to the required texture and with "All Layers" checked in the control bar - this means that both the selection (which is on the same layer as the fill) and the colour blocks (which are on an underlying layer) will constrain the Paint Bucket fill. What's the advantage? Well I could texture-fill all the pleats on the Countess's skirt in two goes, by first doing all the lighter blue pleats and then all the darker blue ones, without having to painstakingly trace around the edges of each pleat; the colour blocks handled that for me. 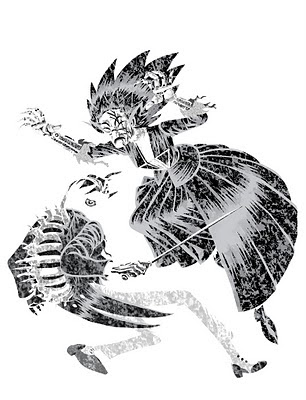 2b) Greys
Once I've got the textures done I make a layer between the texture and the colour blocks and fill it with white; then I make another couple of layers and fill certain parts of the background with grey, sometimes using the paint Bucket Tool, sometimes the Brush Tool with certain texture brushes of my own. I also use Select: Layer Transparency to make a selection that exactly matches the contents of the texture layer, then fill with a mid-grey on an underlying layer to beef up the textures a bit. I make a second fill on a layer above the textures and fill it with white, then set the layer to Multiply so the white becomes invisible. I name this layer "Blacks."
3) In Corel Painter 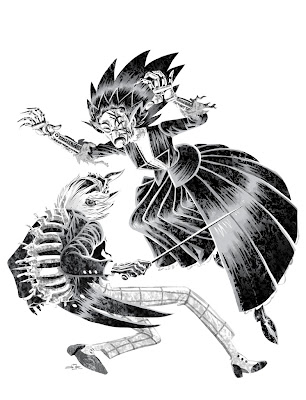 I open the Photoshop file in Corel Painter. You can choose to convert to Painter's native RIFF format or not. Painter will work with both,  I usually convert because RIFFs save a lot faster, just remember you'll have to save a copy in TIFF or Photoshop format for Photoshop to open the file afterwards.
Remember that weird "Blacks" layer full of invisible white? I pick that layer, click "preserve transparency" on the Layers palette and paint into it in black using the Digital Watercolour Brushes. Because those invisible white pixels exactly match the shape and position of the textures in the layer below, and because "preserve transparency" only lets you paint where there are already pixels, I can shade over the textures very quickly, without ever having to worry about "coulouring outside the lines." This trick works with Photoshop too.
After that, I also do some painting with the same Digital Watercolour Brushes on a new layer to soften up the edges of shadows a bit and add a bit of modelling to the whites. On some pages I also add more texture with Chalk, Sponge and Spatter brushes, but here's that's not needed.
Then I save out in Photoshop format and finish off.
4) Tidying Up in Adobe Photoshop
I open the file in Photoshop and do a quick check for overall tone and contrast (Photoshop has a better rendering engine than Painter so you can't really see how the page will print till you see it in Photoshop). I might add odd bits of shading or highlights to make sure the drawing is clear and you know what you're meant to be looking at - though here the drawing is simple enough that I don't need to do that.
The final step is to make two duplicates of the file (Image: Duplicate with "Duplicate Mereged Layers Only" checked to produce flattened files). I convert one to Greyscale (Image: Mode: Greyscale) and save it as a TIFF file. This copy is then put up on the 2000AD FTP server, where it will be used to print the cover. The second copy is reduced to 72dpi and saved as a JPEG for mailing to Tharg-in-residence Matt Smith for approval.
Posted by Unknown at 9:00 am

That's a hell of a lot of work. Each time you've posted your step-by-step guides I've been gobsmacked by the amount of time, trouble and work involved in your illustrations. The end result is worth it though. I particularly enjoyed all of your postings about The Vort. Interesting that you use Painter, I don't think I've used that old chestnut since the 20th Century.

Matt - I've been trying to email you without much success - is there any chance you could email me please.

you can get hold of me here