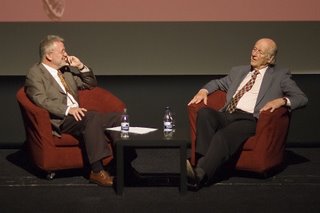 Tony Dalton (left) with Ray Harryhausen
Sorry for the lack of postings the past couple of days, we'd bunked off to go see Ray Harryhausen at the National Museum of Photography, Film and Television in Bradford. A good evening, though a tad disappointing as we had to slip out, just as the questions were starting, to catch the lamentably early last train. The event, in the form of an interview on stage by Tony Dalton (co-writer of the two recent books on Harryhausen) was very much focussed on matters technical, and we'd hoped to ask some questions on narrative. Still, it was wonderful to spend a couple of hours as a fanboy, breathing the same air as a childhood hero. Harryhausen was in good form, still exuding enthusiasm for his unique brand of film-making, and dryly sending up the whole process of plugging his new book.

One recommendation ; if you go to the NMPFT, there's a fantastic curry-house just behind the museum, Omar Khan's. One of the staff at the museum recommended it to us as "not the cheapest, but very good," though in fact the prices seemed pretty reasonable (presumably one can get very cheap curry in Bradford).

On the way back I spent a day catching up with my dear, neglected old mum (and also found I'd left my laptop's modem cord at home, hence the lack of posts), then to Nottingham for a summit meeting with Ian, who'd come over. We spent the day in earnest discussion, planning the new series for 2000AD, Stickleback.*

It'll soon be back on the treadmill again... though in the meantime, there's a lot to be done. My belovèd, the peripatetic Dr.F, has research leave this semester, so in a week's time, we're off to Edinburgh. Not only do we have to pack, but worse, we have to shovel the vast amounts of crap filling every room into the loft, so the guy who's renting from us will have somewhere to put all his stuff. Fun fun fun.

Ah, I'll keep D'eye open for you next week as I trudge around Edinburgh avoiding my clients wrath :) Now that the Festival is over the city has returned to some sort of normality but still a hugely enjoyable venue. I trust you have been before?

Oh yes... My old friend Dave (whose wedding was last month) used to live just over the Forth in Inverkeithing, so I visited Edinburgh pretty regularly in the 90's. Dr. F has lots of friends there too, so our social circle will likely be wider than it is at home (assuming we ever make it out of the flat :-)
My big worry about living in Edinburgh is that I'll blow all my money at the Beyond Words bookshop on Cockburn Street...

Ha ha, yes. At lunchtime during the week you can spot many a frustrated Agency designer in that very shop, searching in hope for inspiration. Something they can steal and make themselves look fantastic but no doubt be found out in the long run. I like dropping in once in a while to see who I can catch out. And of course to buy :)

You should also pop into Transreal Fiction at the Grass Market, that's where I picked up my copy of your WoW book. Its a little book shop thats run by one of the guys that used to run the Science Fiction Book Shop on West Cross Causeway well before Forbidden Planet bought the place and ultimately moved it and ruined it :(

I think I know the place... a number of Dr.F's Edinburgh mates were regulars at the Science Fiction Book Shop, and I'm sure she's taken me into this one. No doubt it will be another continuing threat to my financial security :-)