A Bad Week For Shelf Space 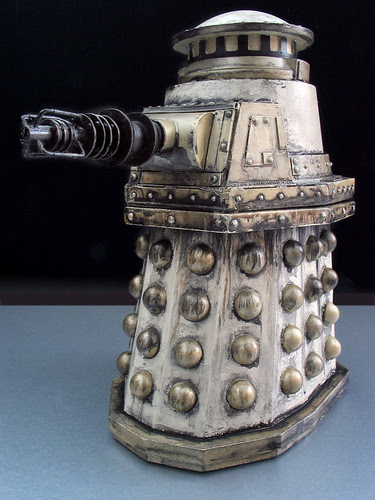 Dalek Number 31: Special Weapons Dalek
from the 1988 Dr.Who episode Remembrance Of The Daleks
As a result of the kindness of others, I find myself awash with delightful new toys this week. First in the list has to be the wonderful Special Weapons Dalek given to me by Eric Moore. A sort of Dalek heavy artillery, it appeared in only one episode of the Sylvester McCoy Dr. Who story Remembrance Of The Daleks. It's a magnificent beast, 8" (20cm) high, assembled and lovingly painted by Eric himself. Eric will be familiar to regular readers of this blog as a builder of Martians and the chap who commissioned the sketch of a burning Dalek from me for the Film and Television Model Club charity auction in aid of DebRA. 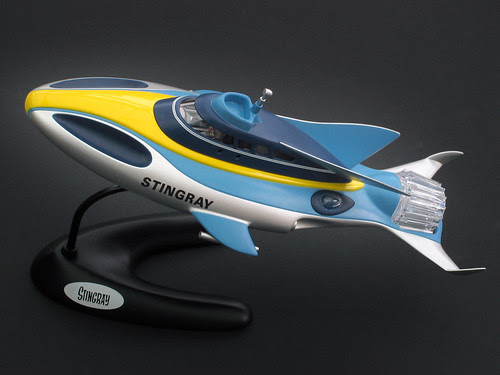 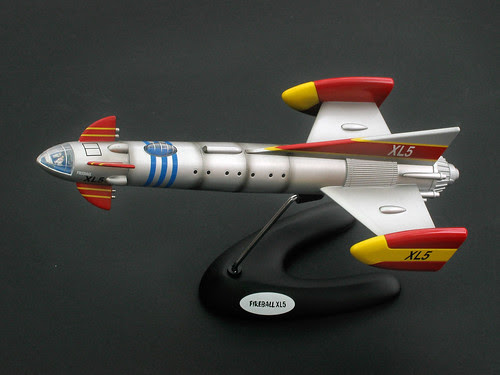 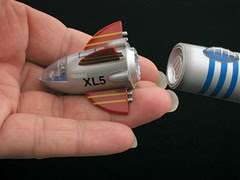 Thanks to my lovely friend and colleague Ian Edginton, I'm also the owner of two of Product Enterprise's jewel-like Gerry Anderson vehicle models; a Stingray and a Fireball XL5.

Bottom Left: The "Fireball Junior" nose-cone of the Fireball XL5 is held on by a powerful magnet.

Ever since I was a wide-eyed five-year old poring through old TV21 annuals, I've wanted a Dinky toy of both these babies; I seriously considered buying them when they first came out, but at £40 a pop they were just too expensive. Luckily for me, Mister Edginton is a human bloodhound when it comes to remaindered stock of cool stuff, and he presented them to me last week at the Birmingham show.
Both are made of die-cast metal and are satisfyingly large and heavy - in fact, I'm certain that they're built to have the same feel in my adult hand that, say, a Dinky Toys Thunderbird 2 or SPV had in my tiny five-year-old's hand. They each have some small but pleasing extra feature - on Stingray, the landing skids extend (though they can't support the weight of all that metal), and the nose-cone of the Fireball XL5 (aka "Fireball Junior", above left) is held on by a ferociously powerful magnet, which makes the tiny spaceship jump back into place with a pleasing metallic snap.
Both models are beautifully finished and exquisitely detailed - for example the cabin interior of the Stingray contains not only a miniature Troy and Phones, but also the various control panels around them on both sides. I've waited 35 years to own something like these, and the wait was worth it. 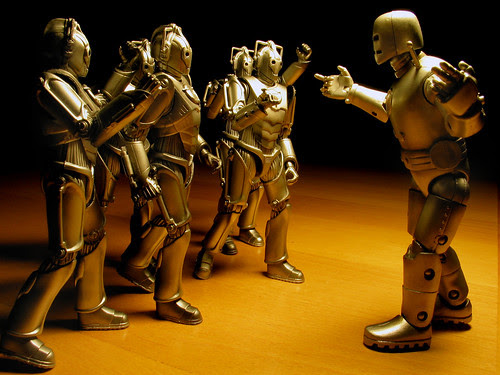 5" High Original Iron Man Figures were going cheap at Birmingham - sadly this one doesn't get on with my Cybermen...
Posted by Unknown at 10:39 am

Hey, i recognise that Gunner!
Glad to see he's in a good home.
Hey Matt, started on that Grand Lunar:

Special Weapons Dalek has issues I think, there must have been a reason why he got to be in that unit !!