Who Killed Round Robin? 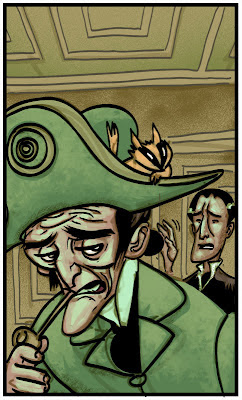 From the online comic Who Killed Round Robin?
Characters depicted here created by INJ Culbard and Craig Conlan
In between paid work, I've been (intermittently) taking part in an online game of comics consequences. Who Killed Round Robin has been running on Blogger since January, with seven comics creators participating - I.N.J. Culbard, Dave Taylor, Woodrow Phoenix, Craig Conlan, Colin Fawcett, Nigel Parkinson and yours truly.

The blog is here and the finished pages are here - I've only managed a shameful three contributions and none since February, but it has given me a chance to try out some stuff for my next project for 2000AD - but more of that anon...
Posted by Unknown at 7:20 pm

Labels: Comics, Consequences, Online, robin, Round, Who Killed Round Robin?

Very nice - love the way such varying styles can sit side by side with each other.
Assuming it does finish at some point, are there plans to get it into print?

Would this unnamed 2K project be the previously unknown (to me) "The Vort" that has just popped up in Rebellion's next round of solicitations?