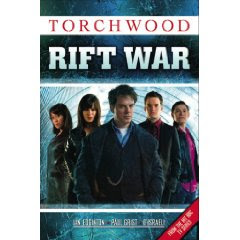 Ian Edginton has pointed out to me that the Torchwood: Rift War collection is now on pre-order from Amazon.co.uk.

Don't be fooled by picture of mopey actors on cover; Torchwood: Rift War (left) is a collection of comics, and better still, mostly comics by Paul Grist. (And some by me and Ian).

At £6.59, it's only a smidge more expensive than buying "our" two issues Torchwood magazine, yet it contains the whole of the Rift War story arc, including lots of lovely artwork by Paul Grist, one of the greatest practitioners of comics working in the industry today!
Posted by Unknown at 1:11 am