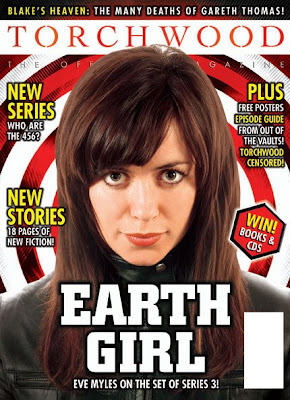 Torchwood issue 11 (dated December 2008) - a couple of months behind now, but the first I've seen of it.
When you're a commercial artist, there's usually quite a gap between your involvement with a project and the actual publication; these days, I tend to blog about projects when they're published rather than when I'm working on them, so that there's more of a connection between what I'm writing and what the reader sees (this works particularly well with the weekly episodes of stories in 2000AD).

Sometimes, as with graphic novel collections, the gap is even longer; but today's experience is a new one. Due to a change of editor a Torchwood magazine, I only got my copy of issue 11 (dated December 08) today - so for the first time I got to see part 2 of Ian's and my Torchwood story in print. 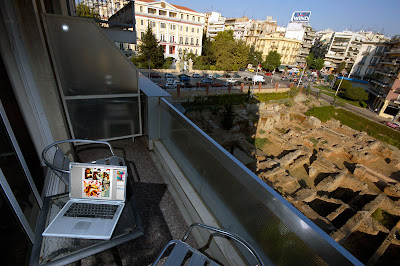 Working in Thessaloniki, Greece
(Photograph for illustrative purposes only - actually, I was working in the morning, when the sun beats down on the front of the hotel and sitting on this balcony was like being a bug under a magnifying glass.)
One advantage of a delay like this is I can tell a tale out of school; at the beginning of September, I posted that I'd finished the first episode of Torchwood and was surprised to get away without any corrections. After a couple of weeks without hearing anything back, I thought it safe to sneak off to Greece for a week (it made my deadlines a bit tight, but it was the only time Dr. F had free for a holiday).
I took an old laptop with me (largely for backing up photos), but the hotel had a wireless network, so one morning I checked my email and... now they wanted corrections. And they needed them quickly, of course. 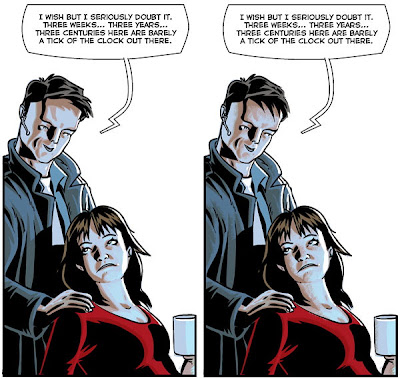 An example of a correction to Captain Jack's fringe - not much work in itself, but the character appeared in almost every panel of every page.
The main problem was that I'd drawn the characters from publicity photos supplied by the BBC to Titan (Torchwood magazine's publisher). It turned out that these photos had been taken before the series was filmed, and that John Barrowman's hairstyle had changed in the mean time. It was a minor thing - his fringe was shown gelled and sticking up in the photos and combed down in the series - but it meant correcting multiple panels on every page (see above). This would have been simply irksome at home, but the old G4 PowerBook I had with me struggled a bit when it came to dealing with the large files I'd generated on an Intel Mac with six times as much RAM and 20 times more scratch space.
The old machine never fell over, bless it, but saves took ages - and it seemed longer in a hotel room that quickly turned into an oven as soon as the sun came up. There was also the question of uploading the 100mb or so of files across the slightly creaky hotel wireless network. It all got done in the end, but it was a bit of a trial. Dr. F was a star - nipping out to buy me litres of pineapple juice and a box of baklava that rapidly began to ooze liquid honey in the furnace heat. 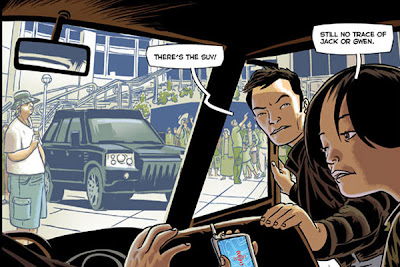 Above: The Torchwood SUV taken from a rendering of a 3D model of a Landrover (below left)

With episode 2, I reverted to my old method of working from CG models (developed when I was working on Scarlet Traces: The Great Game). In the first episode, I'd had some difficulty drawing the Torchwood SUV, and in the second I knew it was due to appear in several pages. A bit of research online told me the custom vehicle used in the series was based on a Landrover, and after a bit of poking around I found a CG model of the thing I wanted. The custom elements of the Torchwood SUV were simple enough that I didn't bother trying to add them to the model; I just drew them in by hand.
The main difficulty I encountered was that my cheapo 3D app - Carrara 6 - couldn't read the format of the model I'd bought. Big thanks to my mate and 3D-guru Rob Szczerba for saving my bacon by sorting out a file conversion for me.

In this episode, I also used CGI for Tosh's Mini Cooper, but luckily I already had a model of that to hand, thanks to the amazingly useful Taschen book and CD set 500 3D Models (Volumes 1 & 2). 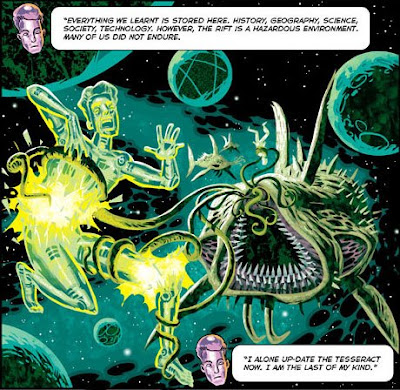 Fun with textures: this flashback panel gave me a chance to try the Stickleback technique in colour. 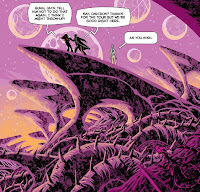 The best bit was drawing the alien landscapes inside Omicron's pocket universe; Cardiff's a fun place and all, but there's only so much delight to be taken from drawing shopping centres. I wanted to make the pocket universe sequences visually distinctive, so aside from my usual trick of using different colour schemes for each location, I tried using a variation of the Stickleback texture technique on the alien landscapes.

This was also a chance to see how the texture effects worked in colour; I was worried they might print over-dark and "block-up," but even on the semi-matte paper Torchwood's printed on, it seems to have held up fine. On one panel (the flashback with the Omicrons being wiped out), I tried the full-Stickleback technique (no outlines and "painted" shading), which has printed okay, but looks a bit bland; I'll need to re-think if I'm to try using it with colour.

The funny thing is, the first texture comic I ever did, Reflector (Spotlight) - a strip for the Semana Negra Festival in Gijon, Spain - was in full colour, but since backtracking to black & white for Stickleback I seem to have lost the knack. Heigh-ho.
Posted by Unknown at 10:13 am

I'll need to try and pick up the second issue I somehow missed it and got an xmas issue instead on the day it was due out.As ever its nice to see behind the scenes as it were.I've only just started colouring on the mac so the I find this stuff really helpful

If you haven't seen it, this entry might be helpful.

I had thanks, It's more the use of filters and textures and the like i'm trying to get to grips with.That and I find I'm having to use bolder colours to make sure the art does nt look faded.

Fascinating insight as ever, Matt

That Guernica strip is brilliant. Using coloured textures like that can easily end up with a real dog's dinner, but you've created something quite potent there. The lack of a key line lends itself to combining your landscapes with Picasso's painting.

It all looks beautiful!

Poor mactop, at least you had some Baklava to make up for it.

I'm enjoying the Torchwood strip much more than the series. Can you and Ian do the series as an animation, I'm sure it would work better.

Superb post and a great insight to your craft.