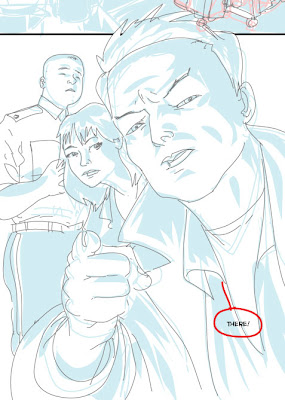 Captain Jack, Gwen, and Gav the security guard from Torchwood: Rift War part 6 Torchwood ™ and © BBC 2008.
Created by Russell T Davies. Torchwood Magazine published monthly by Titan magazines.
I've just finished the first part of a two-episode story with Ian Edginton for Torchwood magazine; it's a bit of an adventure as I've never seriously had to do likenesses before. Titan have taken the very sensible step of using what I call the "Saturday Morning Cartoon" approach - instead of trying to do exact likenesses of the characters, they got me to do stylized character designs based on the actors, then work from those. The idea is that to be able to tell who's who without losing fluidity in the drawing, which tends to happen if you're trying to draw portraits all the time. I'm not sure I've quite got the hang of it (I have to fight hard to stop my version of Gwen turning into Marge Simpson), but I've not been fired yet… what the actors must make of it all, I don't know.

Meanwhile Ian's script for this story contains more familiar material, such as a neat little tribute to Jack Kirby's "cosmic" stuff. On top of that I get to do another tip of the hat to Henshin Cyborg, and work with my old mate Steve White for the first time since 1993, when he edited Kingdom of the Wicked for Tundra UK.

Part one of our story should, I think, be out sometime in September, so keep an eye open.
Posted by Unknown at 12:00 pm

Man, that's great! I may just get you to illustrate the upcoming Who and Torchwood RPGs at this rate!!

You just think y'self lucky you didn't have to draw Donna Noble!!!

And now you come to mention it... there is a spooky resemblance between Gwen Cooper and Marge Simpson....

ooh, good stuff! My childhood was blighted as I always wanted a Henshin Cyborg. A kid up the road had one and would not swap it for Maskatron, the git.

One day the Henshin Cyborg will be mine!!

Strangely enough, Trav28, my parents bought me maskatron and my brother got Steve Austin, then they got me Muton and he got Cyborg...

Why did they keep thinking I should have the evil looking toys...?

What tortured childhoods we had.

I might just have to get that Henshin Cyborg anyway Rob, due to time travel being beyond my means and all ;)