Be Sure Your Sins Will Find You Out 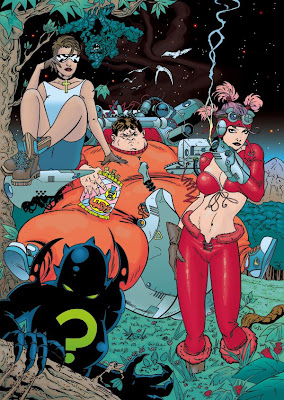 One of the drawbacks of being a commercial artist is that your mistakes are as public as your triumphs. I found myself reflecting on this fact when I saw that this month's Megazine is accompanied by a reprint volume of Pussyfoot Five.

It's also the series where my career as a 2000AD colourist jumped the shark.

It was in January 2000, and I'd been working as a full-time colourist for 2000AD for just over a year. I was hanging on by my fingernails, using a patchy self-taught set of Photoshop skills and a rickety old Power Computing Macintosh clone (anyone remember those?) which creaked like a ship in a high wind whenever I used more than three layers to colour a page. Despite that, I was doing very well commercially; editor David Bishop fed me all the work I could handle, to the point where quite a few progs were coloured half-and half by me and Chris Blythe. I'd lucked into the job by getting a computer at exactly the time 2000AD were switching to computer colouring; back in 1998 there weren't many colourists in the UK with the combination of skills and equipment, so I was in.

The problem with colouring other people's work, is that I find it pretty strenuous. It’s a very different proposition from colouring my own stuff, where I have a picture of the colouring in mind from the beginning. With other people's work, there's always the slight feeling of scribbling all over someone else's drawing; half the time you have no contact with the artist, and even on the occasions when you can get in touch and get some sort of direction from them, there's still a sense of treading on eggshells about the whole process.
On top of that, getting to grips with the new technology on tight deadlines had meant a nightmarishly steep learning curve in the first few months. There's a huge difference between being able to do something, and being able to do it reliably, to order. Working out the simplest, most efficient ways of working takes a lot of trial and error. I mean, for the first six months, I didn't even have a graphics tablet! Madness! 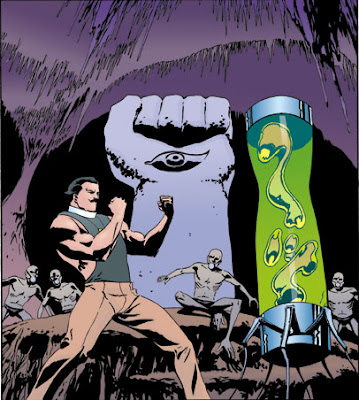 From Devlin Waugh: Chasing Herod, drawn by Steve Yeowell.
Devlin Waugh © 2009 Rebellion Developments/2000AD
Devlin Waugh created by John Smith and Sean Phillips
By early 1999, I was pretty much on top of the basic technique, but another complication arose; I entered into a long-distance relationship. Those of you who've tried it will know it's taxing enough in itself, but the nature of the job made life much harder.
As a colourist, you're pretty much at the end of the working chain, so you're making up for any delays caused by the writer or artist. This makes planning time off a nightmare. In the old days, I used to take work with me (I once coloured the cover for a Titan Books Batman collection on my Gran's dining-room table), but now I was tied to the computer and therefore home, as laptops were way beyond my price range at this point. Luckily, after a difficult first few months, I was put onto the epic 25-part Devlin Waugh: Chasing Herod. Artist Steve Yeowell had been working on the project for several months before I came on board, so I was presented with a stack of artwork and a schedule for delivery. By pushing my working schedule, I could get a couple of episodes ahead, enough to make the occasional week off to go and visit my belovèd! Bliss!

Hand on heart, I think I can say I didn't cut corners on that project, but I was content to rest on my laurels and just make sure the work was in on time. I stopped growing, stopped looking for new ways to do things - and the came Pussyfoot Five.

It was natural enough to give me Pussyfoot Five, as I'd been the colourist of Devlin Waugh, but this new strip was a very different proposition. Devlin Waugh artist Steve Yeowell has a classic, balanced style that looks great in black & white but is lovely and "open" for colour; his use of line weight and spot blacks mean the drawings are very clear; you can more or less put flat colour underneath them and they'll look grand.
Nigel Raynor's work on Pussyfoot Five was complex and all drawn in a uniform line. It required careful colouring to pull the characters out from the backgrounds and the lend them weight and solidity. I suspect Chris Blythe, with his background in painting, could have done an excellent job of this (his colouring on series 2 is immeasurably superior to mine); I was suddenly finding that the flat colours and soft gradients which worked under the likes of Cam Kennedy and Charlie Adlard weren't going to cut the mustard here. 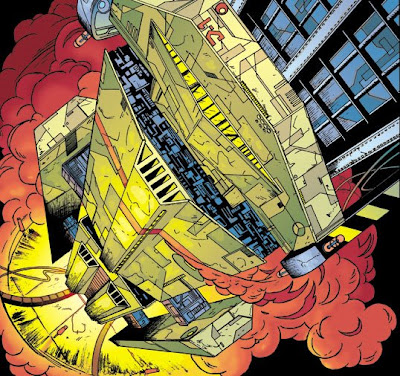 I re-coloured this panel twice and it's still a pretty terrible job
Pussyfoot Five © 2009 Rebellion Developments/2000AD
Pussyfoot Five created by John Smith, Steve Yeowell and Nigel Raynor
On top of that, I'd misunderstood the whole tone of the series; faced with the title "Pussyfoot Five" and the ironic tone of John Smith's dialogue, I'd delivered a colouring job inspired by Austin Powers, only to discover editor David Bishop had been thinking The Matrix. I substantially re-worked the episode (the only time I've ever had to go back and re-colour), but there wasn't time to start again from scratch, which is what the job really needed. I lost heart: the resulting effort still looks to me like something from a child's colouring book, and it was a relief when it was over. 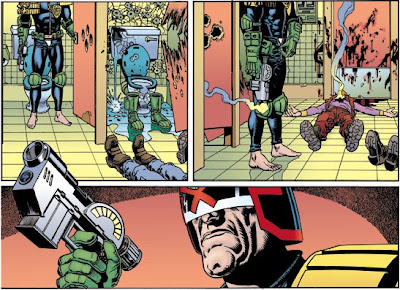 And that was the beginning of the end for me as a colourist at 2000AD. I hung on for a few months, turning in a couple of things I'm still quite happy with (The Judge Dredd story Rest Stop with Chris Weston and A future shock called Crash Crack with Siku), but the writing was on the wall. When Andy Diggle took over as editor of 2000AD, he took me to one side and told me I'd no longer be getting colouring work from the comic.

Of course, the fact that he asked me to write and draw three Future Shocks for him considerbaly softened the pill.

By the end of that year I was a published writer and artist in 2000AD, an ambition I'd held since I was eleven. I'd completed new material for a reprint volume of Lazarus Churchyard with Warren Ellis, and I was just starting on an exciting new web comic thing called... Scarlet Traces.

And looking back now, it's all down to that pivotal moment on Pussyfoot Five. You see, I'm not really an adventurous type; I tend to burrow down and seek security rather than get out there and make things happen. So, if I'd done a great job on Pussyfoot Five, and 2000AD had kept offering me colouring, would I have had the nerve to chuck it over to go and do Scarlet Traces for an unknown (and, as it turned out, short-lived) web company?

In some parallel universe, there's a me sitting here today, photoshopping muzzle flashes onto yet another episode of Sinister Dexter and looking at Steve Pugh's latest work on Stickleback with bitter envy in his heart. And there's the lesson; in the end, the price you pay for actually getting out there and doing stuff is the odd Pussyfoot Five, rattling skeleton-like in the closet.

Bit tough on Nigel Raynor, though.
Posted by Unknown at 12:07 pm

Being a bit hard on yerself there!
But a good lesson for all of us about doors closing, and opening!

I remember seeing a lovely Batman 2 parter (part of some earthquake event thingy) that you drew and coloured about 11 years ago. Then I saw your colouring in 2000ad and thinking what a terrible waste of your drawing talents. But like you say this led to Scarlett Traces which has to be one of your best pieces of work ever. I liked it so much I even brought the collected edition despite owning the original in the JD Meg.
I could be wrong about this but I always thought your colouring was usually recognizeable due to your use of purples, blues and reds.

I'm not an avid reader of 2000AD, but I've always respected the publication and the talent that has been associated with it. Thanks for writing the story of your career as a colorist (colourist) there. I appreciate the honesty and insights you shared regarding the industry and practice of an applied artist.

It's funny how disasterous things can often lead to unexpected new opportunities..

Your art never fails to inspire me.. I've read Leviathan about 10000 times now.. and is till feel sick with incompetence trying to figure out how you made such a perfect book.