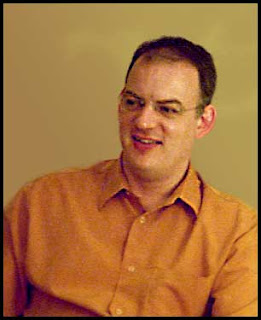 Adrian Kermode at Bristol in 2001, the night before he won a National Comics Award

I've just received the terrible news that Adrian Kermode has passed away. A comics writer and regular of the UK comics scene in the early 2000's, "Ady" will be remembered by his friends for his warmth, wit, and ribald sense of humour.

Ady is probably best known for his collaboration with artist Terry Wiley on the series Petra Etcetera. A sequel of sorts to the highly-regarded series Tales of Sleaze Castle created by Dave McKinnon and Terry Wiley, Petra Etcetera cut out the fantasy elements of Sleaze Castle, concentrating instead on real-world characters and settings. Ady's writing style fit the material perfectly, so that Petra Etcetera won the National Comics Award for Best Independent British Comic in 2001, and was nominated again in 2002. He was also a contributor to Selina Locke's anthology title The Girly Comic. 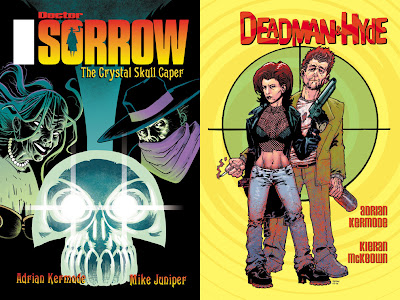 Left: Cover to Doctor Sorrow: The Crystal Skull Caper (art by me)
Right: Cover to Deadman & Hyde (art by Kieran McKeown, colouring by me)
Doctor Sorrow © 2003 Adrian Kermode & Mike Juniper.
Deadman & Hyde © 2004 Adrian Kermode & Kieran McKeown.
Following his success with Petra, Ady's interests turned towards the horror/action genre. I was lucky enough to work with him twice during this period, producing a publicity image and a cover for Doctor Sorrow: The Crystal Skull Caper (2002) and colouring the cover art for Deadman and Hyde (2004), both published under his own Charaydis Press imprint.

Sadly, in the last few years the demands of Ady's civil service career effectively put an end to his writing. He'll be sorely missed by his many friends. Our sympathies go out to his family, his partner Debs and her daughter Frankie.
Posted by Unknown at 12:48 pm

Thanks for that tribute D'iz - I'll post links to it if I may (I don't actually have my own blog).

Adrian used to run a lot of role-playing games, and in gaming terms I think you'd describe him as "chaotic neutral" - his interest in an idea was mostly by how crazy it was rather than right or wrong. He once declared he wanted to make a science fiction movie with giant papier mache props and special effects - this when we were both at school with about a tenner budget between us. He was essentailly a raconteur - any meeting with him mostly consisted of listening to him telling anecdotes, and he'd confabulate them every time with more and more entertaining (if not strictly true) details. He was a relentless optimist, or at least not one to worry about small details like whether something was possible or not. His doctor warned him half a dozen times that his blood pressure was enormous, and that maybe drinking an entire bottle of Glenmorangie during 48-hour video-watching sessions maybe wasn't necessarily the best idea for his health; but Adrian would shrug and say "Neh, it'll be all right!" His infectious optimism is the main reason no-one seriously expected this.

Ya silly sod, Adrian! Now what are we going to do without you?

Adrian would be chuffed to be on a blog - great picture too but I always hated that bloody orange shirt!

The police found Adrian in his home on Saturday morning, although I called them at Friday teatime asking for a concern for welfare check as he had not called in at work and no-one could reach him at any of his numbers.

From what the police tell me it was very quick - I hope to God he never knew what hit him.

There are no words for the pain, anger and sorrow I feel. Frankie and I will miss him so much. He was a crazy, passionate nutter, and as Terry said - capable of the most outlandish story telling - he also had atrocious taste in jokes. And never laughed at any of mine.

We had 8 too short years together and it will take me a while to forgive him for leaving me so soon.

He kept every promise he ever made to me - except the one where we would grow old and senile together.