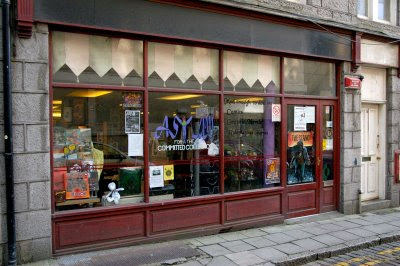 Asylum Books & Games, still with the "temporary" shop sign I painted onto the window back at the opening in 1999. 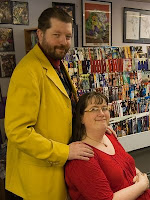 Just back from a trip to sunny Aberdeen for the party and signing to celebrate the the 10th anniversary of my old mate Mike McLean's shop Asylum Books and Games.

Regular readers of this blog will be familiar with Mike from his various cameos in my comics; he's turned up in everything from Lazarus Churchyard to Stickleback, and even had his own Tale of the Leviathan in 2000AD. We've been mates for the better part of 12 years now, despite my drawing him as everything from a seedy strip-club punter through alien sex fiend to bomb-wielding anarchist!

Anyway, thanks to everyone for a whale of a time, and for coming up with such interesting stuff to draw (Storm from X-Men as a guinea pig is still my favourite, narrowly pipping Blood-soaked Budgerigar).

Storm from X-Men as a Guinea-pig. Freakish and wrong, but I did it anyway.

Click on the photos to see the set full-size on Flickr.
I asked permission to Blog these, but if you'd rather your picture was taken down, just let me know and I'll remove it.
Posted by Unknown at 7:48 pm

I still think 'Blood-soaked Budgerigar' demands t-shirt marketing. The whole range of 'deranged pets' would go down well with the young folks.

Great to meet up with you again at Asylum. Hope to see you up there again in the future.