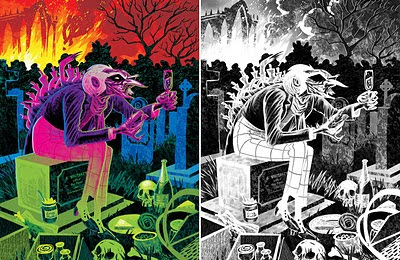 Colour and black & white versions of my 9th cover for 2000AD, complete with a little tribute to my late friend Steve Whitaker (click on image to see larger version). Can’t believe I missed putting in a "fishpaste" reference, though.
Stickleback © 2010 Rebellion Developments/2000AD
Stickleback created by Ian Edginton & Me.
I did a trial version of this cover in colour, exploiting the colour masking technique I use for setting up the texture effects, but Tharg-in-Residence Matt Smith decided that a migraine-inducing cover might be a bit much for the Squaxx dek Thargo. Lucky for you, but a pity for me: colour covers pay better :-) 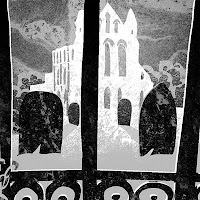 A key location in Bram Stoker's seminal vampire novel Dracula, Carfax Abbey is one of the London properties purchased by the Count from Jonathan Harker. Ian and I have "borrowed" Carfax abbey a couple of times now - the first being for our steampunk graphic novel Scarlet Traces - and this version is based on the abbey at Whitby, the seaside town which also features in Dracula. 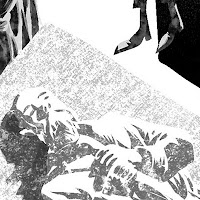 Page One: Effigy of Steve Whitaker

This effigy is a little tribute to my late friend and teacher Steve Whitaker, who was, among many things, an extremely gifted comic artist and colourist. He's probably best remembered for his colouring on Alan Moore and David Lloyd's dystopian tour-de-force V for Vendetta, though Steve also played a minor role in 2000AD history; he contributed colouring to a number of Brendan McCarthy's Judge Dredd stories, including The Judda from the Oz storyline.

The effigy shows Steve with his trademark long coat and umbrella. Thanks to Ian Edginton for suggesting the tribute. 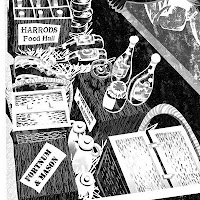 Supplied by two of the great London department stores; Fortnum & Mason was founded in 1707 and built its reputation on supplying high quality foods, and is world-famous for its luxury picnic hampers and branded loose-leaf tea. One of the founders, Hugh Mason, was a servant of King George III and helped to nurse him during his famous period of madness (as described in the play by Alan Bennett). When George recovered, Mason was paid off, and he used the money to go into trade.

Harrods started in a small way in 1834, as a wholesale grocery store in London's East End. In 1851, the owner, Charles Henry Harrod, moved the store to Knightsbridge, to take advantage of trade from the Great Exhibition. His son Charles Digby Harrod took the one-room shop and by 1898 had built it into a business employing more than one hundred people and sporting the UK's first escalator. Harrods Food Hall is world-famous. The store is currently owned by Egyptian businessman Mohamed Al Fayed, whose fifth son Dodi died alongside Diana, Princess of Wales in a car crash in Paris in 1997. The Harrods brand now extends to a bank, an estate agents and an aviation company. 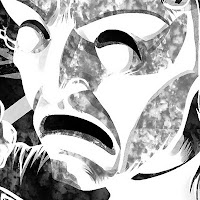 Greek theatre dates back as early as 550 BCE, evolving, it's believed, out of fertility rites for the god Dionysis. Masks were used in Greek plays to define the different characters; as few as 2-3 actors might be involved in a play, but more characters could be introduced by having the actors change masks.

The masks had exaggerated features and facial expressions, and this led, by Roman times, to the idea of the "Tragic" and the "Comic" mask (a pairing which symbolizes theatre in the West to this day). The Countess's mask is a "Tragic" type. 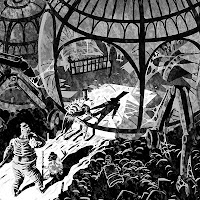 Revisiting the setting of the fake seance from the first-ever episode of Stickleback: Mother London, drawn back in September 2006 and published in December that year. 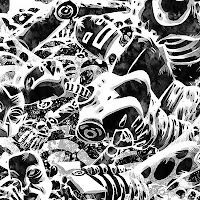 In the script for the first part of Stickleback: Mother London, Ian Edginton asked for various classic robots from old British comics to appear in Thynne's lair. At the time, the demands of layout prevented me from showing this, but three years later, the discerning reader might just possibly be able to recognize Robot Archie and Togo from The House of Dollmann in this pile of old robot parts. 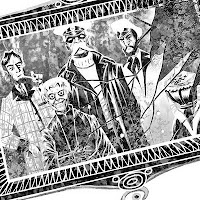 If this seems a little League of Extraordinary Gentlemen, it's worth remembering, dear reader, that all of us who play this kind of tune are riffing off Philip José Farmer.

From left to right:

Phylo Thynne
Our own invention, the creator of malign automata from Stickleback: Mother London.

Rotwang
Mad scientist C.A. Rotwang will be best remembered as the creator of the Art Deco "Maria robot" in Fritz Lang and Thea von Harbou's silent movie SF-classic Metropolis. The character was played by actor Rudolf Klein-Rogge, upon whom my version of Rotwang is loosely based. Despite the apparent "oo-err vicar" double-entendre for English speakers, the name Rotwang is actually pronounced "roat-vang" and probably means "red cheek." ("oo-err vicar")

Captain Mors
Also known as the "Air Pirate," Captain Mors was the hero of the snappily-titled Der Luftpirat und sein Lenkbares Luftschiff (The Air Pirate and His Steerable Airship), a German dime novel that ran for 165 issues from 1908-1911. Captain Mors' adventures took him out into the Solar System, so that in the Encyclopedia of Science Fiction (1993), Frank Rottensteiner wrote that "There is a case for calling this the first sf magazine." The author(s) of the series are unknown, though writer Oskar Hoffmann is cited as a likely possibility both by ESF and Heinz J Galle in his 2005 POD reprint of selected Mors stories.

Robur
Aeronaut and anti-hero of the Jules Verne novels Robur the Conqueror and Master of the World (Published 1886 and 1904 respectively).
For more information, see the entry Page Ten: The Mistral from Part One References.

The Countess
Since revelations about the Countess are an integral part of the plot, I'll avoid giving any spoilers. Suffice to say, if she spent her youth hanging around experts in robotics and aviation, it's no surprise we find her now living on a dirigible manned by automata!
Posted by Unknown at 12:06 pm

Althought the b&w cover is very striking - I thinnk the colour version is actually the winner!
Great work!

I've been gagging for this post Mr B! I'd heard there was a coloured version of the cover and must have checked your blog a gazillion times a day until it arrived!

S'nice to see the full version of the cover too, the whole burning London part of this 'London's Burning' cover was completely lost behind the 2000AD logo!

Thanks for such an informative and ejoyable blog!

Those are some fiendishly good colours! It's a shame the Mighty one didn't go for it.

Saw this in a Facebook link from Martin Hand.

I adore that coloured version. That would've burnt it's way through my subs envelope!

Holy crap. Your work is amazing. Love the style, lighting and layout as well.

Got to be time for the next Prog update shirley?

I'm desperate to find out if the London overview includes the GReenwich buildings from Scarlet Traces?

Tharg-in-residence is the eleventh doctor?! heh