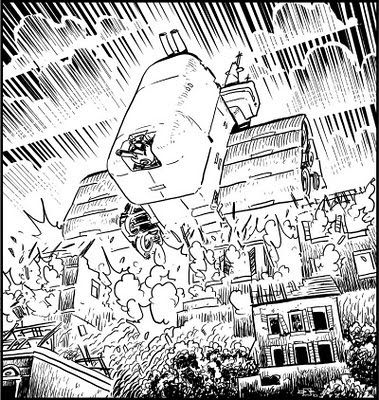 Tanks for the Memory; sketch produced in Manga Studio EX 3 to test the Perspective Rulers feature.
So, a couple of years back I picked up a copy of Manga Studio EX, a Japanese graphics app designed especially for drawing comics, and ported into English. Several people I knew were using it, but after playing with it for a bit I let it drop; the translated documentation was rather sparse and I'd not been able to figure out how to get some of the cooler functions to work. On top of that, it rendered greys by default as patterns of dots, a feature many people love, but which I find inflexible and potentially problematic (my first sketch produced in Manga Studio came out of my laser printer with horrible moiré patterning because the default dot screen clashed with the printer's output resolution). None of these things was beyond fixing, but somehow after I put it aside to deal with "later" I never got round to it again.

Then the other week I got round to watching the video of Dave Gibbons' "webinar" (horrible word) in which he demonstrates drawing in Manga Studi o , and suddenly all became clear. Re-enthused, I went back to my old copy of the app, and within an hour I was starting to get to grips with the features I wanted, plus curbing some of the habits I didn't like - including figuring out how to rid myself of those pesky dot-screens.

Sketch of Dirty Frank produced in Manga Studio 3; no dots please very thankyou
Dirty Frank © 2010 2000AD/Rebellion Developments
Dirty Frank created by Rob Williams and Henry Flint.
This pic was the first result - I still had a few things to figure out at this point, but it got me fired up to try more.

Since then I've started learning how to use the amazing perspective rulers (which among other things, give me the ability to do brush ruling digitally for the first time - see the sky in the pic of the giant tank), and I'm starting to figure out the 3D import options (though whether that will actually prove more efficient than placing renders from Carrara into my pages only time will tell).

Where's this coming from? Well, aside from the love of new toys, I've been getting more and more disenchanted with my current drawing app, Adobe Illustrator, for several years. The last two updates have failed to provide either a page rotate tool (It's now the only serious graphics app without one) or, more importantly, improvements in speed. Worse still, one of the most useful tools, the Selection Lasso*, was removed a couple of versions ago and shows no sign of returning. Despite the name, Illustrator is really a designer's tool, and there's no percentage in Adobe developing or supporting tools solely for the tiny number of us who draw freehand with it.

*That's the former-alternate Lasso Tool with the black arrow, not the formerly-default-now-only-one Direct Selection Lasso with the white arrow, which is still with us.

Changes in my own work haven't helped; working for 2000AD has pushed me to do grittier inks with more rendering, which puts a real strain on a vector program where every line is a separately-memorized editable object. Things have got so bad that I currently add most of my hatching in Photoshop after the main drawing is completed in Illustrator. I've tried inking everything in Photoshop, but it's somehow clumsy and surprisingly slow; Manga Studio, on the other hand, was designed for the task, and feels like it.
I've had to refer to the manual a few times while playing with Manga Studio, but on the whole I've been able to figure out things on my own (the interface follows many of the conventions of Photoshop so it's quite intuitive to use). There are a few things I find a bit odd; I'd like it to be easier to draw in opaque grey, and I wish you could globally disable that damned dot-screening, but on the whole the app's what it should be; a quick, intuitive tool designed for the task I'm trying to perform. What makes it all the more impressive is that I'm using a legacy version (3), which is running on Rosetta on my Intel Mac, but it's still fast and stable. It'll be a while before I switch for professional work (I want to be more practised before I trust deadlines to it) but if I end up using Manga Studio to earn money, the $120 upgrade to version 4 will be a no-brainer.
Posted by Unknown at 9:00 am

That's some lovely stuff, Matt. I'm looking forward to seeing how your work develops in MS. Although strictly an amateur scribbler, I've been a convert for a over a year now… I should have known you'd love those perspective rulers. The v4 upgrade allows you to place live 3D objects directly into your page, amongst other things, including a proper colour mode.

PJ Holden has blogged in some detail about moving his workflow to Manga Studio, so you might that find some of his thoughts save you a bit of the trial-and-error that inevitably comes from moving your workflow to a new software package.

It's a great program. I highly recommend Manga Studio for Dummies. Basically a much more readable version of the manual.
Opaque greys are easy too you can make an inking layer any colour you want. I haven't gone into it too much my self but on the pro version of 4 you can have vector layers too.

Somewhere the news of your conversion of Manga Studio is being greeted with the chant "one of us, one of us" ;)

This might interest you as a number of droids (and other artists) discuss the merits of MS and swap tips (and cheap offers on the upgrades).

Everyone and their cat and dog is going onto Manga Studio these days, I am slowly slowly getting tempted to give it a go.