Familiarity Breeds Contempt, Or On A Wing And A Prayer 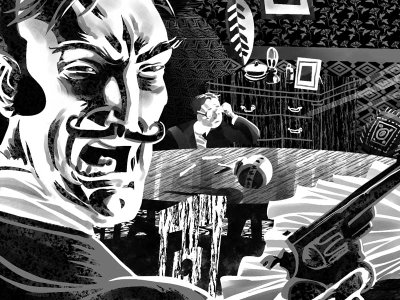 The finished version of the panel from Monday's post; saved from doom by my suspicion of Painter.
The current work binge is really putting a dent in my regard for Corel Painter 9.5; though I've been using version 9 for about two years, it's mostly been for finishing off colouring done in Photoshop. To get the organic look I want for Stickleback, an awful lot of the work has to be done in Painter, and it's a bit like spending a couple of weeks on holiday with a mate; you get to see the way they pick their teeth over breakfast and leave their smelly socks all over the floor.

I have two main gripes with Painter 9, one a niggle, one really serious.

The niggle is to do with the rather primitive way Painter deals with colour. Stickleback is a black & white comic, so the most efficient option would be to work with greyscale files (which only contain "space" for shades of grey, so they don't use up as much memory as files that contain "space" for colours). Photoshop certainly lets me do this. Painter, however, deals with only one colour mode; RGB. This colour mode allows an image to contain millions of colours, and represents black & white images perfectly well (you get true, neutral greys), but the trouble is, even when you're not using it for anything, the extra "colour space" still exists and takes up a lot of memory; for the same black & white image, and RGB file will be about three times bigger than a greyscale one.
Since I use a lot of layers, I end up generating huge files* (sometimes in excess of 400mb in RAM), which slows down the computer and means every save takes ages. And of course, the longer you work on a file, the bigger it gets, so the longest saves are always when you're tired and desperate to be done, which makes them seem even longer...

Which leads me to the more serious problem.

When dealing with really big files (above the aforementioned 400mb limit), Painter 9 has developed the alarming habit of crashing during saving; it's only happened a couple of times, but it's worrying enough that I find myself making safety copies via the Finder, which at 70-80mb a pop means I'm filling the hard disk more quickly than I did when I was working on colour. Worse, on the last page I did, Painter somehow scrambled the file on the final save, so it looked fine in the Finder but nothing can open it. Luckily I'd cloned the page and saved a flat copy, so I didn't lose work, but with four more pages to finish off by 8am tomorrow, it doesn't fill me with confidence... (see update regarding a solution to this problem)

*Pages for 2000AD are physically bigger than the US-format pages I was doing for Dark Horse, making these RGB "black & white" pages much bigger in terms of file size than the colour pages for The Great Game.
Posted by Unknown at 6:52 pm

Ouch- you have my sympathies.

This *might* work for you. Take one of your illustrations down to 100dpi (Iassume you are working at 300dpi) and of course this will reduce the size considerably.
Then, in photoshop, use a plug in like Genuine Fractals to pull it back to 300dpi prior to going to press. This'd make the actual 'construction' of the illustration in painter more workable I'd say.
I was forced to use this revently when a drawing we did for a postcard (A6) was suddenly requested for a magazine cover. The resulting print was actually okay.
I suppose you could try it....
Dave

It's a good idea - I've got a copy of Genuine Fractals, and used this technique for my early stuff for Dark Horse (notably the cover for Kingdom of the Wicked and the first ten pages of The Great Game, before I gave up and started working same size). I scaled down to 200dpi, then back up to the 400dpi Dark Horse require, pasting the re-scaled colouring under pristine 400dpi linework.
The thing with Stickleback is, I use a lot of selections, and all that stuff is so much simpler if you can work with non-anti-aliased art (400dpi is your lower limit for that stuff, and I scale down to 300dpi before sending the pages to 2000AD). It might still be worth doing a test... though I didn't suffer many problems with the remaining pages, largely because I made more of an effort to reduce file size by consolidating layers in Photoshop before opening the files in Painter.

Genuine Fractals is a boon and blessing to men though... it's pulled my sorry Yorkshire ass out of the fire more than once.