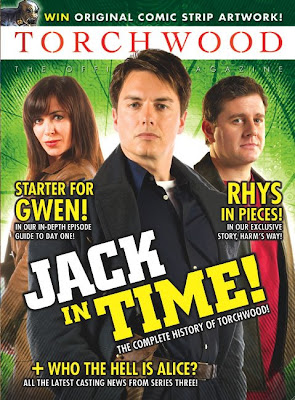 Just a quickie to say that the first part of Ian Edginton's and my Torchwood strip is in the new issue of Torchwood magazine (issue 10, dated November 2008). This Saturday (18th October) Ian and I will be giving a talk about the strip at the Doctor Who Comics Con at the Lass O'Gowrie pub, 36 Charles Street, Manchester, M1 7DB, (phone 0161 273 6932).
Posted by Unknown at 11:05 pm

Mr D'I, at the top of that Torchwood front page, it says one can win artwork, would it be your?

I think it's Paul Grist's stuff they're talking about there... so, even better!

Hey Matt
I was wondering if you got the e-mail I sent about the Breccia books.it might have been judged as spam because I put a link to my blog in it.Whoops!