Only a week late, I've finally managed to upload my photos from Vworp Vworp, the Doctor Who Comics Convention at the Lass O'Gowrie pub, Manchester. It was a terrific event, small-scale, allowing fans and guests to mix and chat in a very relaxed way (for more on this see Christian-Mark Cawley's report on kasterborousblog.) Ian and I got to do a panel on our Torchwood comic (out now folks!) and the food was delicious. Thanks to Gareth for hosting the event. 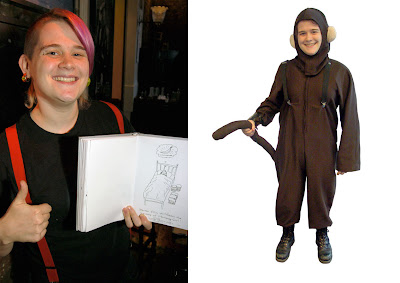 One of the pleasures of the day was bumping into Laurie Sage, who I first met on Free Comic Book Day 2002 in Norwich Library, where she'd turned up dressed as Monkey Girl (right). The cartoon I did in her sketchbook (left) refers to the fact that Warren Ellis was very suspicious of the free bananas she was handing out that day.
Posted by Unknown at 11:16 am