Part two of Lowlife: Hostile Takeover was where my now well-documented dissatisfaction with Adobe Illustrator came to a head. While I'd been drawing part one I'd become more and more aware of how slow Illustrator was; it really was choking on all the  little Carlos Ezquerra-style rendering lines I was putting into my pages. Illustrator stores every line as a separate, adjustable object, which means that rendering or hatching  really does clog it up pretty  quickly.

I hadn't got to grips with Manga Studio at this point, so I decided the try laying out and pencilling the pages in Illustrator, then see if inking them in Photoshop would be faster. Illustrator's various geometric vector tools allowed me to lay out panel borders, lettering and building perspective grids with much more flexibility than Photoshop permitted, but since I keep my roughs and pencils as simple as possible, Illustrator would still run pretty quickly for me.

So I jumped in at the deep end with this big panel - starting with the solid blacks and adding outlines afterwards. The solid black stage was already proven - I use Photoshop to add those when I'm drawing Stickleback - but inking the outlines proved trickier than I expected.

The problem was the pressure-sensitivity of the Photoshop brushes - with the default settings on my Wacom tablet, they tended to suffer from a "jump point" where the lines would suddenly jump from thin to thick when a certain level of pressure was reached, something that fiddling with the controls in both Photoshop and the Wacom preferences could improve but not fix.

Worse still was that all the brushes were what I call "heavy" - they'd produce their thickest line unless the stylus was held off the tablet all the time. I'd expect to have to do this for Photoshop brushes that were mimicking real-world brushes, but the effect prevented me from ever mimicking the feel of working with a dip-pen, which is springy but which can be allowed to rest on the paper. Again, fiddling with Wacom and Photoshop settings didn't solve the problem.

On the plus side, having a page rotate tool was a big relief, and being able to straightforwardly erase things was lovely (I know Illustrator now has an eraser tool, but using it on variably-stroked lines can cause some weird effects). Being able to subtract via selection was handy, and having layer masks which allow me to reversibly erase into black areas was superb - something I wish Manga Studio could emulate.

But, in the end, it came down to this; the "heaviness" of the brushes meant I couldn't draw any quicker in  Photoshop than in Illustrator. For the next few episodes I hit on the compromise solution of doing the bulk of the inking in Illustrator and then adding rendering (and, as I always have, texture) in Photoshop afterwards.

I'll be interested to see if anyone can see a difference in the appearance of this episode. 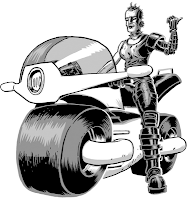 A quick word about the bikes in this episode: for Aimee's bike I wanted something a bit different and futuristic. Inspired by the bodywork of a BMW prototype, I came up with the idea of a fly-by-wire racing bike with a saddle, fairing and control assembly that floated clear of the engine and wheels. This allows for computer controlled stabilization and steering override to help the rider cope with Mega-City One's 200mph+ traffic speeds.*

Finally, here are a couple of panels I was quite pleased with that mostly got covered in lettering. I knew they would too; I just have too much fun drawing backgrounds.